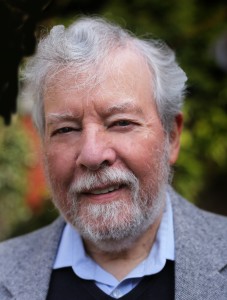 I was born in Derry, a city where war was fought on the streets for thirty years in the last century. After four years study in Belfast, I returned to my native city in 1964 and taught English for seven years until I met and married Liz, a Scot, and moved to Edinburgh in 1971. Apart from three years spent teaching in Africa, this has been my home.
From my student grant in the sixties, I bought a Halina 35mm camera. Made in Hong Kong, it was a crude imitation of German and emerging Japanese rangefinder models. It had neither a focusing aid nor any form of metering. Guesswork produced many failures, sometimes consistently through a roll of expensive film but I was learning.
My next camera had Selenium cell metering and focusing aids but I cannot remember the maker – I think it was Soligor. Like many, I felt the need for interchangeable lenses and got myself an East German Practica with an f2.8 Takumar lens, designed for the more expensive Asahi Pentax. Through time, I would acquire that brand’s ‘Spotmatic’, a standard setter in 35mm photography at an affordable price. We lived in Zambia for several years, not too far from Kafue Game Park where many great holidays were spent and a mass of transparencies acquired. 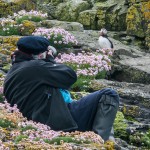 John Patton getting in close to take a picture of a Puffin (Picture: Courtesy Eric Begbie)

In the eighties, I succumbed to Canon advertising and graduated through an AE1 to various EOS models, one of which I still have. For a period, I was a member of Stirling Camera Club but professional demands limited not alone my time for the Club but taking pictures as well. Family holidays annually in France were my sole available commitment.

A late convert to digital, I bought a Canon 20D soon after launch in 2004 and rejoined the Camera Club. I now use a 6D and 7D with a selection of lenses. As these portfolios show, I have a spread of interests – portraiture, landscape etc; living in Central Scotland, midway between its great cities and with easy access to the Highlands, provides plenty of subject matter.
I hope that you enjoy this selection of images. Use the contact facility to let me know what you think. That’s how we learn.