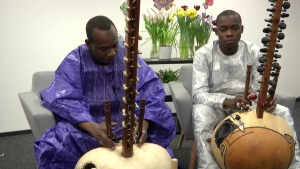 Liz and I have been to   performances in Celtic Connections every year since it began in 1994 with the exception   of 2011 when the expected arrival of grandchild number two,  John Joseph Greenwood, put all plans on hold.  From its early days, the festival has encouraged collaboration, given that it has already done the groundwork and gathered all these performers in Glasgow for a month. The inspiration for  Transatlantic Sessions, the successful BBC programme,  can be traced back to Celtic Connections.   It is now the largest winter festival of its kind anywhere in the World and this year will feature over 2000 artists in 300 events at 20 venues.

Last night , my son, Neill,  and I were privileged to hear  Malian kora maestro, Toumani Diabete,  perform his composition , ‘The Mande Variations’ with the RSNO.  Collaborations are risky undertakings and ,particularly, as in this case, time for rehearsal was minimal. Full credit then to the RSNO who had most to lose in the presence of this fêted, Mali  ambassador ; it was unobtrusive   in the spirit of the music but amplified   melodic harmonies with a delicacy that we don’t normally associate with a full orchestra in this context.  Recognising that they were always going to be a distant second in the fashion stakes, the musicians added a splash of red to their sober attire. The Mali visitors , meanwhile, on a drab winter’s night were a vivid splash of all the primaries.

In an evening of joyous, vivid, cultural  spontaneity, there were many memorable  contributions; the Mali xylophone – balafon  was demonstrated with a skill and agility that was dazzling in accomplishment; the opening act featured a powerful, female vocalist with a dynamic range which rendered amplification superfluous; the audience was on its feet for the final section , proving that a Glasgow audience can sing lalala – lalala with the best of them.

Introducing his final piece, the haunting and achingly beautiful   ‘Lampedusa‘ , written in memory of the 350 African immigrants who drowned in the Mediterranean , attempting to reach the Italian island of the same name, Diabete  told his audience,  ‘in talking of immigration, let us also speak of justice, peace , spirituality and education’.