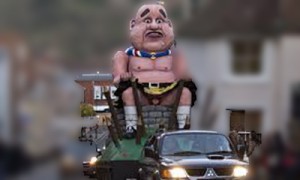 The eccentric people of Lewes in Sussex burned an effigy of the First Minister, Alex Salmond, on Bonfire Night last week. Various media apologists assured us that this was just good fun and that many other ‘weel kent’ faces have suffered a similar fate on previous occasions. They laughingly dismissed any suggestion that this could possibly be viewed as primeval behaviour , ritualised racism or xenephobia. Oh no, this is just the good, liberal folk of a Home Counties town having their bit of innocent  fun. Any connection between this barbarism and the rise of right wing, political parties was spurious. English votes on English laws was a totally unrelated issue. It counted for little that many Scottish people expressed concern at this offensiveness and its implications. A couple of months ago they were subjected to a love-in by the English Press and politicians who wanted Scotland to remain part of the Union; the PM said on the eve of the Referendum that it would break his heart, if we were to leave.  For his part, the First Minister found it gratifying to be considered as big a threat to Westminster as Guy Fawkes.

That may certainly be the case; recent polls have shown that the  SNP has 50% + support in Westminster voting intentions which would see them returned with more than half of the 59 seats available. There is wide speculation that Salmond will seek election next May in  the Inverness, Nairn, Badenoch & Strathspey Constituency, currently held by Danny Alexander, Lib/Dem Chief Secretary to the Treasury. The Lib/Dems are certainly vulnerable and Alexander is viewed as George Osborne’s stony-faced hatchet man  who played a lead role in propagating the NO Campaign’s financial scare stories and, especially,  on the currency issue. Meanwhile, Milliband and his party are in internecine turbulence, largely of its own making and UKIP is picking up Tories on a daily basis. With no clear winner and a hung Parliament, Salmond and the SNP would be in a very strong bargaining position on Scottish Home Rule and much, much more.

Cricket, played with great skill and affection in Sussex,  is one of our most dignified and civilised sports, even when the Australians are involved. The people of Lewes should embrace their national game and perhaps they would then learn to confront history in a more mature and grown up way as a result.

They have much to learn.