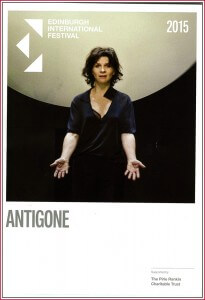 Jean McConville , the widowed, Belfast  mother of nine children, was abducted and murdered by the IRA in 1972; she was secretly buried and her family waited over thirty years for an official ceremony. She is the best known of ‘The Disappeared’ and her death still causes controversy throughout Ireland.  Antigone,  disconsolate and wracked  with grief, is  totally determined to bury her brother, Polyneikes, recently slain  in a bloody battle. The new leader of Thebes, the despotic Kreon, has issued an edict that he should not be buried since he was an enemy and traitor to the State. Those responsible for the death of Mrs McConville may well have shared some of his  thinking.  A hallmark of classic drama is its universality, its enduring relevance to current events –  that continuing conflict between secular and divine law.

This is a minimalist, Ivo Van Hove production at the King’s; Antigone (Juliet Binoche) enters in a swirling wind on to a bare stage that could be anywhere in the World.  Back projection of bleak landscapes and occasional, urban images on   a cyclorama  are the only pointers to location. Although they add to the unsettling turmoil of the drama, there are times when this device distracts from the action on stage. Percussion and strings drive the plot along effectively. An enormous sun disc  suggests  that we are watching a twenty four hour event. Kreon, (Patrick O’Kane)  has all the programmed, apparatchik language and thinking of a local authority boss.

The lines, particularly in the opening scenes, are spoken almost sotto voce and occasionally proved inaudible. We want to hear them and, particularly so, since we shelled out Festival prices for the seats. There is a fashion today for under projection which may work on film but is an unacceptable flaw in the theatre.

The production uses a new script by the Canadian poet, Anne Carson, which is certainly very accessible but at times   the vernacular jarred and I yearned for the heroic language of Heaney’s ‘Death at Thebes’.  Phrases such as ‘top notch’ and ‘walking a tight line’ seemed positively out of kilter with the dramatic forces of the tragedy.  That said, the phrase,  ‘ the sacrilege you call public policy ‘, resonated and super imposed  on my consciousness  an  image of the demonic antics of an unbalanced Ian Duncan Smith during Osborne’s recent Budget speech.

Burial is spiritually comforting for the bereaved; it alleviates the distress of loved ones and communities. The Mc Conville family have finally been allowed to lay their mother’s remains to rest. There are still too many disappeared throughout the World and including here in Scotland; may they also rest in peace.

Antigone is at the King’s Theatre, Edinburgh, until August 22nd