Whither Arlene, Ruth and Boris? 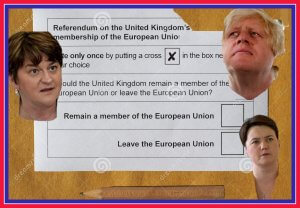 Pupils seeking examples of irony for their Higher English prelims should forsake Shakespeare and read Tim Shipman’s book , ‘All Out War’; it is a Brexit tale  that deftly describes the deals, betrayals and broken promises that laid low much of the recognisable, political class in Britain. On the negative side, it is overly London-centric  and as the tv coverage of the count painfully revealed, powerful forces  outside of the Metropolis would shape the future of these islands in brutal fashion.

The Nissan car plant is the single most important employer in NE England with about 34 000 jobs dependent on it. It was established to manufacture motors for sale in the Single Market, including Britain. The whole British motor industry, all foreign owned, including Rolls Royce, shares the same aim. Sunderland voted by  61% to leave the EU. Securing our borders and limiting immigration were the principal reasons  for their decision to support LEAVE; it may not have occurred to the electorate that their main employer was an economic migrant. The Government has stuffed Nissan’s mouth with silver to prevent relocation ; the official announcement merely said that they had given the Japanese giant guarantees. We know what they mean.

David Cameron lost the vote by 4% and resigned at 7.00am the following morning. The DUP urged voters in the Six Counties to vote LEAVE but lost 56% to 44 %. However, Arlene and her colleagues  simulated victory because of the result on the ‘mainland’. Irony is not a new phenomenon in unionist politics. We remember the DUP founder, Ian Paisley,  leading a band of uber-loyalists  in an attack on the Queen’s representative, the Governor, Lord Erskine. In recent times, the PSNI (responsible for upholding the Queen’s law) were repeatedly and violently  attacked  by the Twadell Camp mob. The DUP admittedly is not over-endowed with political nous or perceptive intelligence but even those backwoods foragers must be privately  alarmed at the scale of their  defeat and the reported haste with which many young unionists have sought to acquire Irish Passports in the wake of the result. Worse still, it has ignited talk of a United Ireland, not just in Dublin but in London too, it seems.

Following the rout of Labour in Scotland at the last Election, Tory leader, Ruth Davidson, became the darling of the anti-nationalist press. She stood shoulder-to-shoulder with David Cameron on the REMAIN side and was a speaker in one of the televised debates. She savaged Gove and Johnson for their part in the support of UKIP and professed her undying belief in the importance of access to the Single Market.   All changed, changed utterly on June 23rd and now the ambitious Ruth is fully supportive of new Prime Minister , May who believes that trade outside of Europe is the new Nirvana and will put the ‘Great’ back into Britain.

Boris Johnson desperately wanted to succeed Cameron and his key strategy was to keep the Brexiteers in the Party happy, safe in the knowledge that they would lose but he would have been seen  to have done his bit. Fate and the latter day Cassius, Michael Gove, put the boot into any prime ministerial  ambitions that he may have nursed. May appointed him to her cabinet on ‘the better in the tent’ law of politics and he knows that he is easily disposable.

The UK is facing lower growth, higher inflation, falling wages, more borrowing , less trade and greater debt.    That it should come to this. And then there’s Trump.