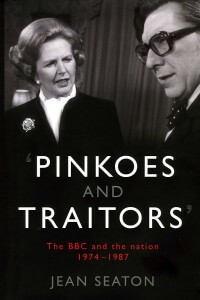 As in most things, Nigel Farage was absolutely wrong when he decried the left wing bias of the BBC in last week’s Leaders’ Debate. On the contrary, it is a bastion of the establishment.

‘Pinkoes and Traitors’ , the recently published history of the BBC by Jane Seaton, covers the period 1974 – 1987 which, politically was dominated by Thatcher and the Tories from the end of the seventies. She confirms that the Corporation is pre-eminently a safe anchor for pro-government thinking ; it is full of conservatives drawn, from Oxbridge and  public schools. Nicholas Owen, Andrew Marr, George Alagiah, John Simpson and James Landale  were all educated privately. The last named at Eton – which goes someway to explain the cosiness of the velvet gloved Landale interview with Cameron in the PM’s kitchen. This is not an exhaustive list but it exemplifies the editorial  power of information management, wielded by a small coterie of staff. I have just seen Norman Smith, reporting from the launch of the SNP manifesto and his script, redolent with terms like ‘English fears‘, might well have been written by Conservative Central Office.

Seaton, Professor of Contemporary History at University of London, a frequent broadcaster on Radio 4, is something of an establishment figure herself and her position is reflected in some of the views she expresses. She disapproves of the broadcaster’s quasi-neutral stance in the Falklands and believes that the BBC should have been a trustworthy confidant. Doubtlessly, she also believes that the job of the BBC was to propagate MOD press releases, following army activity in Northern Ireland. Indeed, for years after Bloody Sunday, it did exactly that. She argues that the BBC was often the instrument of its own problems through obduracy to resist Government intervention; she accepts that vetting for political reliability of BBC personnel  by MI5 as ‘right and proper’; the miners were self destructive and got their just desserts.

She devotes nearly thirty pages to the wedding of Charles and Diana  and in perhaps the most telling piece on the author’s attitudinal approach she writes, ” two scruffy men arrived  to remove plastic sheeting from the aisle”.

They were workmen but their treatment by the author provides context in which we should assess her treatment of history.

Pinkoes and Traitors: The BBC and the Nation is published by Profile Books – price £30.00