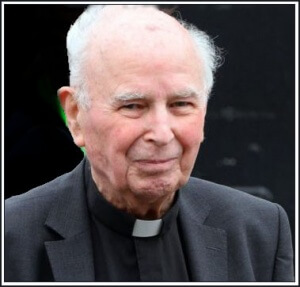 Bishop Eddie Daly’s first ministry was as curate in St Patrick’s  Castlederg;  I began my   teaching career there at St Eugene’s Secondary School. He would have been very aware , as I was, of the extent of rural poverty and deprivation in the surrounding area. Nevertheless, his gentle charisma was skilfully employed by the Church to raise funding for the new  secondary school.  Since the partition of Ireland, the Catholic education system in the Six Counties had been entirely separate from that of the State provision and a significant proportion of capital costs and maintenance of schools was borne by the Catholic population. Teachers’ salaries were paid by the State , provided they had sworn an Oath of Allegiance to the Crown. Many of us did so in silence with the late John Bradley JP – what the Church called ‘using a mental reservation’. Young  Father Daly would have been keenly aware of the injustice of the system but he used his remarkable talents to ensure that the children of his parishioners were not disadvantaged in educational terms. The Church resisted attempts for further State involvement as there was a chasm of distrust of Unionism, particularly when a known opponent of Catholic education, unreconstructed bigot, Harry Midgely, was appointed Minister of Education by Basil Brooke.

Job done in Castlederg, he was transferred to St Eugene’s Cathedral in Derry where  there was a pressing need for new schools, particularly in the secondary sector. Fr Daly was a prolific fund raiser for the Derry Diocesan Building Society. He had long been interested in   theatre and recognised a need for cultural organisations in the City. He founded the ’71 Players with my brother as creative director for many years, working alongside his artist wife as set designer.  Fr. Eddie brought a  Belfast plasterer, Frank Carson,  to star in the annual pantomime  with a cast of local talent; Jim Reeves was just one of many international performers to appear on stage at St Columb’s Hall.

Bloody Sunday made him a reluctant World , political figure. He was an eye witness  to  a searingly, raw attrocity, the state murder of unarmed civilians by British  forces.  He told the media that he had been beside the teenager, Jackie Duddy, when he was ‘murdered’.  Eamonn McCann has underlined the importance of Bishop Daly’s choice of words at the time: ‘  “From a political point of view, what he said on Bloody Sunday was at least as important as the photograph with which he will forever be associated. His repeated, emphatic statement in a television interview even before the smoke had cleared from Rossville Street that Jacky Duddy had been unarmed and fleeing from the soldiers when he was shot in the back was hugely important in challenging the official version of Bloody Sunday from the outset.’

Also present in Derry that day was Captain Mike Jackson and shortly after the murders, he instructed each of the soldiers who had fired rounds on what their statements should reflect. This would become the official version of the events of the day and was regurgitated by a compliant British press. The judicious scandal of the Widgery Tribunal added further mockery of what Fr Daly and many other eye witnesses had seen and reported.  It did not deflect Bishop Daly from his support for an inquiry into the killings and he was also influential in pressing for a review of the case against the Birmingham Six.

His quiet, moral authority and courage have long been recognised and are reflected in the many tributes since his death was announced.