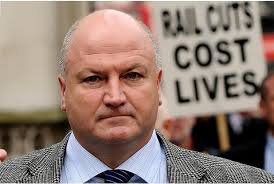 A disturbing gallery of right-wingers, lead by Boris Johnson, paid tribute yesterday to the achievements of Bob Crow, the rail workers’ trade union leader, who had died suddenly the previous evening. The presence of the London Mayor is particularly perturbing to those of us who had read a Guardian interview with Crow just over a month ago. It revealed that Johnson had consistently refused to meet with trade unionists since his election. Crow told the Guardian, ” The sweetshop commerce people who look after all the little businesses – they meet the mayor on a regular basis and put their point of view over. He’s met 86 bankers since he’s been mayor. But he won’t meet the trade unions.”

The Press in the UK generally take a right wing line on all things related to industrial relations. Condemnation of management, even in the most extreme circumstances, is extremely rare. Even the BBC yesterday was talking about the ‘left-wing’ leader of the RMT. Mayor Johnson was not introduced to us as a ‘right-wing’ Tory. I have not heard Iain Duncan Smith called  an extremist  although it is well documented that the  Department of Work and Pensions is in chaos, causing misery to thousands of citizens throughout the country.

There is clear, political orchestration of the demonization of  the working class and the use of immigration as a smokescreen  to drive a wedge between what Tories and their Press refer to as the ‘working poor’ and those in receipt of benefit. The Conservatives have reverted   to type on  public sector workers; profit and privatisation take precedence over need. There was no media outcry when a hedge-fund closed all of its Southern Cross nursing homes. Dogma had triumphed over social need and the result was disaster for many vulnerable people and their families.

Bob Crow was a thorn in the flesh of the Coalition and of the Labour Party which Blair had taken to a position where trade unions were viewed as embarrassing relations to be kept out of sight. Our job as trade unionists is to fight for the rights and conditions of our members but that is not all that we do. In a rare spasm of magnanimity, Boris Johnson acknowledged that London Underground was a success because of the people who work there, Bob Crow’s members. That principle is applicable across all workplaces, unionised or not.

The late RMT leader was a passionate voice for safety on the railways and he fought hard for those who worked on them. That was his job and he did it with supreme effectiveness.

There are not too many of whom that may be said.