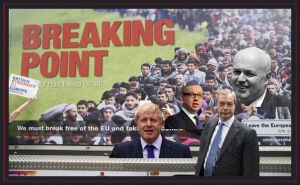 Watching a   Party Political broadcast by the Leave Campaign this week , I was reminded of Tom Lehrer’s quip that political satire became obsolete when Kissinger was awarded the Peace Prize. This was nauseating hypocrisy at its most jaundiced; those propagating that view are the current custodians of the Health Service in England and, for that reason alone,  there is serious concern for its future. Opinion polls suggest that there is significant support for the Leave Campaign , arising mainly from an irrational  fear of immigration.   It was gruesomely  stoked this week by UKIP’s launch of   Nazi style hoardings, depicting a long line of refugees fleeing whatever.

Farage believes that key services such as hospitals and GP surgeries should be franchised out to companies. A quick  glance at the background of the other Brexit leaders further underlines the duplicitous nature of their entire campaign; Michael Gove thinks that the poor have themselves to blame for Food banks and, in common with  UKIP, he would like to scrap the Human Rights’ Act; describing Boris   as a court jester, former PM , John Major, said the NHS would be as safe in   Johnson’s hands as  ‘a hamster with a hungry python’; cruelty ,as George Eliot said, requires no motive outside itself. “It only requires opportunity.” This is the legacy of Iain Duncan Smith whose policies at the Department of Work and Pensions have been largely responsible for  a three-fold increase in poverty levels across the UK.

This is a contest between competing values; an open, liberal , international view of the World in the 21st Century and a narrow, xenophobic nationalism which frequently embraces overt racism.  Billy Bragg has said that not all Leave supporters are racists but that all racists will vote ‘Leave’. ‘Taking back control’ is a semantic fudge for a return to  post war Anglo-Saxon  England (and this is all about England and not Britain). Brexit has no vision for the future, only a harkening back to days of old –  fish and chips, respect for our elders and when women knew their place; back to the boarding house signs which refused succour to blacks and Irish; back to steak and kidney pie and pints of bitter. The DUP is the only political party to give total support to the Leave campaign;  their isolationist and frequently bigoted approach to government of the Six Counties is a powerful metaphor for all that is worrying in the Leave Campaign.

We were in the Scottish National Gallery of Modern Art yesterday and the visit emphasised the importance of Continental Europe in our cultural lives; while post-war Britain lingered in a philistine   backwater, a new wave of  expression was being embraced by artists in Europe.   Picasso’s  ‘La femme  qui pleure’  was anxious and desperate in her mourning ; many would share that grief in the event of a Leave vote succeeding on Thursday. The Brexit Campaign and the   tabloids have whipped up a toxic , anti -immigrant hysteria in a country which has long  accepted multi-culturalism and   social progression.