The buffoon who would be Prime Minister 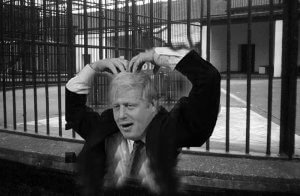 Gabriella clung tearfully to her mother’s arms,  terrified that these men again wanted to  take  Mum away .   The woman was Nazanin  Zaghari-Ratcliffe and the Iranian Police had arrived to return her to prison . She had been  granted temporary release to be with her  family and  four year old child.  The appalling trauma of this Iranian/British woman and her distraught daughter is in  large part  due to the oafish blundering of the former Foreign Secretary, Boris Johnson.  Zaghari-Ratcliffe had been  on holiday in Iran to visit her family ; preparing to depart from Tehran Airport, she was arrested and held on bogus spying charges.  The British Foreign Secretary, Johnson, whose primary duty was to care for the safety of this citizen, wrongly told a meeting of the Foreign Affairs Select Committee at Westminster, that she had been teaching journalism to Iranian students during her stay.  The predictable outcome was a sentence of 10 years in prison. Although this may well have been Johnson’s most critically serious gaffe while in office, it was only one of many:

At a Conservative Party Conference, Johnson was widely condemned when he forecast a bright future as a resort for the Libyan city of Sirte; he knew some Brits with a keen vision  to invest in its golden sands –    ‘once they have cleared the dead bodies away…‘;

He told the World that The French President, Francois Hollande, wanted to administer beatings like some Second World War German  general;

Ignorantly oblivious to his surroundings, Johnson had to be forcibly stopped by the British Ambassador to Myanmar from reciting a totally inappropriate passage from racist Kipling in one of the country’s most sacred temples;

We are repeatedly told by sections of the media, without sound evidence,  that Johnson is a genius ; privilege and preferment have undoubtedly given him a flair for language, although frequently his bon mots are ill considered and offensive. His ‘picaninnies with water melon smiles’ as he described ‘that country’, Africa; offensive limericks about ‘Erdogan and his goats’; the insignificance of the Irish Border and the tail wagging the goat; burcas and letter boxes…..;

This demented and extremist Bullingdon Club/Eton Tory  is constantly touted as the next Prime Minister and   is believed to be currently plotting his leadership challenge with elements of the far-right that are offensive to most civilised society, Breitbart’s  Bannon and the equally loathsome Farage. They are linked by the   philosophy that the wealth gap between  rich and  poor is insufficiently wide.

Some years ago, this Irishman would have rejoiced at the rapid decline of Britain, the inevitable re-unification of Ireland and the likely independence of Scotland. I have mellowed and witness the present  suffering of working people through right wing austerity policies and  the Brexit fiasco.

Trump thinks that Johnson would make a fine Prime Minister just as he has proved himself to be America’s greatest ever President.