‘Churchill – gone to join his father – in Hell.’ 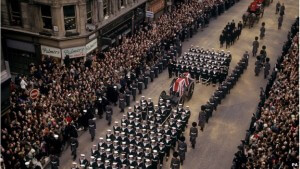 The BBC was in the vanguard to commemorate the fiftieth  anniversary  of the funeral of Winston Churchill. For a fortnight we had trailers and tributes to the achievements of Britain’s wartime leader. The right was unrestrained in the sycophantic revisionism and selective amnesia of the language used to describe him. For some Tories, Thatcher was the only leader in the last fifty years who could even be compared to the great man.

I was in Derry for the funeral of my young sister  when these events were being covered by the media. Churchill is not a name that evokes much affection among the nationalist people of Northern Ireland where memories linger for generations. ” Chip off the Old block“, one mourner said at the wake, recalling Winston’s father, Lord Randolph, who,  at the time when the Liberals were considering Home Rule,   had crudely played the Orange card and declared, ‘Ulster will fight and Ulster will be right.’ How great is the link between that politically expedient mantra and the decades of suffering endured throughout the north for generations since. One man told me that his grandfather had been in a newsagents in 1963 and a customer, noting the headline news of Winston Churchill’s death, observed, ‘he’s gone to join his father – in Hell.’

The tributes to Churchill made little mention of the many grievous wounds that he inflicted across the World and that fester to this day. These cannot be dismissed as anachronistic in a modern documentary because didn’t everybody behave that way? Some of his own colleagues saw Churchill as a brutal and vicious, imperialist racist. His deeds in India and across colonial Africa have been well documented by respected historians. In her Pulitzer Prize winning  book, ‘Britain’s Gulag’ , Professor Caroline  Elkins details the brutality of the Kenyan camps which operated with the approval of PM Churchill. This year’s tributes have overlooked that Churchill invented Iraq, a partitioned state, where disparate, indigenous nations were locked together. He was the Colonial Secretary who oversaw the offer of the Over-Promised lands to both the Arabs and the Jews.

And then there was Dresden.