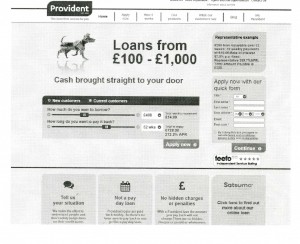 Payday loan lenders in this country have grown exponentially since the Financial Crash of 2008 and have been allowed to extort money from the most vulnerable citizens for the past five years. Government and, indeed, the Opposition, have not seemed overly concerned about their activities until comparatively recently when, with an election approaching, they were shamed into minimal action by Third Sector campaigns.

Wonga has been subjected to the most severe media criticism because it had become the biggest and most arrogant player, charging a 5,853%  representative APR. It’s default charge was £30 per missed payment; that’s enough to make any ordinary, decent loan-shark blush.

Under  the tentative action, announced this week by the Financial Conduct Authority (FCA), interest will be pegged at 0.8% per day. In my calculations, that represents about 300% per year, still an exorbitant rate by any reckoning.

Meanwhile, the Home Credit Industry which typically charges an APR of around 280% has been at pains to distance itself from the malodour, surrounding  the Payday people. Have a good look at the Provident Finance figures in the screen grab   illustration. A loan of £400 over a year will attract £328 in interest charges, if it is repaid within the terms of the agreement at £14 per week. An identical loan from Clackmannanshire Credit Union, repaid at £8.15 per week,  would cost a mere £24 in interest charges (12.68% APR), a saving to the borrower of £304 .

In credit union, members enjoy peace of mind because they are the owners, the principal stakeholders in their organisation and are the antithesis of the hedge fund, wide boys of the credit industry. Credit union members enjoy a range of benefits – charged only on the outstanding loan balance,   repayments that suit the member, no arrangement fees and no penalties for early    repayments. In sum, credit unions are the only ethical, financial institutions around. There is one near you, no matter where you live in Scotland and they are set to play an increasingly significant role in the life of this nation.