Death of a Pupil 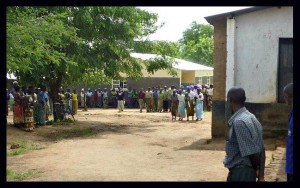 Another pupil had died from the meningitis outbreak. I watched Mr Shawa, the school caretaker, cleaning the white, pine boards and placing  them carefully  against the library building. He was making another coffin, the fourth in as many weeks. His task was carried out with quiet patience, respect and dignity; this one was for Mutsima, a third year pupil who had passed away in the night.

Our house was the nearest to the dormitory block where my car was always available to transport the sick to the small hospital in the town. I had driven  Mutsima there two days earlier. Our chief concern, not unnaturally , was for our eight month old child, Caoimhe , who a couple of months previously had suffered a serious bout of malaria, a killer of many young, African children. That said, my wife, Liz, a woman of quite remarkable fortitude and commitment, worked non-stop with other staff to do what she could  for our pupils.

As three o’clock approached in Tullibody, there was the usual offer of volunteers to collect my son from the nursery which was in another part of the building. Isobel had only just set off when the fire alarm sounded. I suspected a false alarm because the headteacher would not normally  have initiated a fire drill at that hour.   The pupils were ushered to the assembly point in the playground and, as I started to take the register, we became aware of the black smoke billowing over the building. The whereabouts of Neill, my son,  and his helper became an immediate concern but almost immediately he was there by my side. Isobel had obeyed fire drill training to the letter, leaving with Neill by the nearest exit   and making their way to the class assembly point.  Within an hour, four classrooms had been burned down and a roof collapsed. The teachers in that learning area had performed with consummate professionalism and guided all of their pupils to safety. Parents conveyed their sincere thanks. No authority official bothered to visit the school afterwards and teachers were compelled to claim for personal property such as bags and coats on their own insurance cover.

The death of a young girl in an Edinburgh secondary school yesterday stirs these and other memories of death and suffering among the young when it is least expected. There will be a prolonged inquiry into the accident and, where appropriate, blame apportioned accordingly but it will  then be largely  forgotten until the next time.

The family of the dead, however, will grieve every single day for the rest of their lives.