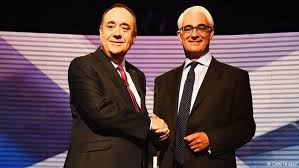 The First Minister, Alex Salmond and Alistair Darling will meet again in a BBC Network Referendum debate tonight.  Since the Kennedy/Nixon encounter of the fifties, television debates, in my view, have assumed undue and unproven importance in persuading the electorate. It is highly unlikely that five o’clock shadow or visible perspiration will be crucial factors this evening. The Scottish Referendum outcome is not about either of these two personalities. On 18th September, we each will have the extraordinary power for around fifteen hours to decide the future governance of this nation. If we are happy with how Westminster has administered affairs and wish to continue with that arrangement, then we shall put a cross in the ‘NO’ box.  If you agree with me and have the confidence to believe that the Scottish people have the resources and ability to manage their own affairs, then the answer is ‘YES’

The ‘NO’ Campaign has been negative since the Edinburgh Agreement on the Referendum was signed and have placed their bets on scare stories about future economic prospects.  Oil resources and currency will undoubtedly be cards that the patrician Darling will major on this evening. The latter is a completely bogus issue. There is absolutely nothing to stop an independent Scotland continuing to use the pound, if it so chose. A Westminster Government, with no power over an independent Scotland, could not stop them. There are examples across the World of exactly that situation. Panama has no say in the Federal Reserve which is conducted exclusively for the benefit of the US. Nevertheless, Panama, with a population similar in size to Scotland, continues to use the dollar and has one of the World’s most stable banking sectors.

Sir Ian Wood has made millions from the oil industry and last week he threw a spanner in the works of the YES people by casting doubt on future development projections within the industry. It may just be of some relevance that the Wood Group has turned its attentions to the fracking industry and the awarding  of licences will be a Westminster responsibility.   The Prime Minister paid his first visit to Shetland within the last month but the purpose of his trip has not been fully revealed, although rumours of a major new field off the Northern Isles have been circulating for some time.  Today’s Herald, no friend of the YES Campaign, reveals some detail of a predicted oil boom in west of Shetland Waters. It quotes Professor John Howell of Aberdeen University, a recognised expert on the geology of oil exploration:

“  The geology west of ­Shetland may be challenging and fraught with uncertainty but I for one would never underestimate the ingenuity of the explorers and I certainly will not be surprised if major discoveries are made there in the next few years, totally changing the perception of the region and opening up a second major oil boom for Scotland.”

We know from recently released papers under the ‘Thirty Year’ rule that the UK Government had a policy of minimising the potential of oil in order to weaken the arguments of nationalists. Cameron is consistent with that policy. I prefer to believe Professor Howell’s assessment.

Tonight is just another event in a long campaign and will not reach any agreed conclusion, if it follows previous patterns for these engagements.

We will make the crucial decision on September 18th.