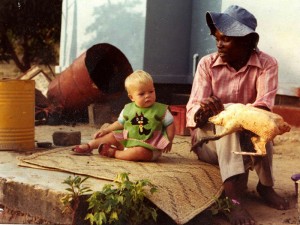 The plain, white boards stood against the wall of the library. Mr Shawa, school technician, examined each one, cleaned and carefully  sanded it before finally cutting them all into six feet lengths. We watched while he patiently and with dignity constructed a coffin which would be used shortly for the burial of one of our pupils; the third to die in just over a week. This coffin was for Mutsima, a third year pupil, who had passed away during the night.

Our house was the nearest to the dormitory block where a car was available to transport the sick to the small hospital in the town. I had driven  Mutsima there two days earlier. Our chief concern, not unnaturally , was for our eight month old child, Caoimhe , who a couple of months previously had suffered a serious bout of malaria, a killer of many young, African children. That said, Liz, a woman of quite remarkable fortitude and commitment, worked non-stop with other staff to do what she could  for our pupils.

It was November 1975 and Liz and I were teachers in a large, secondary boarding school in the Western Province of   Zambia. Post independence, the Government had recognised the urgency to provide second level education in the rural areas of a country three times the size of the UK but with a mere 12 million of a population. The pupils were drawn to the school from an area with a radius of around 70 miles, particularly from the Barotse flood plain of the mighty Zambesi.

Meningitis had broken out suddenly and swept unchecked through the boarding areas.  A medical officer had been drafted in to assist the local doctor and to ensure that medication was dispensed – antibiotics and vitamin supplements. The staff met regularly to review the situation and determine next steps. Meetings were held in the headteacher’s front garden and lasted for hours. Generally the meetings  there were the most democratic, collegiate  and genuinely  consensual that I have ever experienced in any of the schools where I have  worked.

In my mind’s eye, I still see that funeral procession of bereft pupils, snaking  through the acacia trees to bury  Mutsima in the bush. They chanted an acapella version of the ‘Our Father’ in spontaneous, three-part harmony  as they did every week in assembly. Father George, an Irish Capuchin missionary, said a few prayers of committal at the graveside.

These images have lain dormant for decades but have surfaced as we grimly watched the quite desperate  scenes from  the Philipines this week. In Zambia, we had most of the necessary services available but these tragic  people are facing a sixth day without food, water or even the most basic medical facilities.

Initially, Britain committed £6m of aid, less than 1% of defence spending. It has now been shamed into offering to match-fund public donations. The public will give generously.

The need is great and urgent.