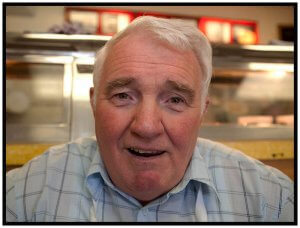 Reaching out to people and touching their lives, is not instinctive human activity. It is learned and practiced behaviour. Not all of us are capable of committing to it nor, indeed, do we   wish to have  any appreciable level of involvement in the lives of others.  Only those who really care and have confidence in themselves are capable  ; it demands a bank of good will from which to draw; generosity of spirit is an absolute pre-requisite; it is not an occasional commitment but a lifestyle choice; it requires humility, appreciation, respect for the dignity of others and the ability to listen and share experience.

Donald Drysdale, who sadly passed away this week in his cherished Tullibody, possessed all of those qualities and more. He was one of those constants in the community who serve as landmarks in the lives of others. I have known him for over 30 years as parent of two pupils in my school, neighbour and valued friend. When I decided to make a short documentary about Tullibody, he was a first choice as contributor. My aim was to seek the views of those who lived and worked there and it could not have been made without the substantial and considered input of my friend, Donald. He eulogised the village and its people and ,clearly,  it was the well, along with his family,  from which he drew inspiration for the many aspects of a diverse life.

He was from a generation for whom hard work, community and concern for those around him were the cornerstones of life. His slightly old-fogey deference towards those whom he considered his superiors was a source of gentle teasing for us but reflected Donald’s embracing of the culture in which he grew up.  In truth, Donald’s gentle spirit and singular work ethic marked him out for me as a very superior individual. In recent years, he had developed some physical bulk and unwelcome, accompanying ailments but it did not detract from his commitment to  work and principally to his family who were the keystones of his life.

For Emma, Lisa, Gemma and the grandchildren,  there will be a momentous chasm in their lives,  a forlorn and unthinkable, deep emptiness.  There has been a sincere outpouring of sympathy for them in  the community   and for it too there has also been a keen sense of  grief at the loss of Donald Drysdale. In the gloomy, winter days ahead, I hope that appreciation and  shared, joyful,  family memories will allow some comfort for Emma , the girls and the wider family.

May he rest in Peace