FAKE NEWS IS NOT NEWS 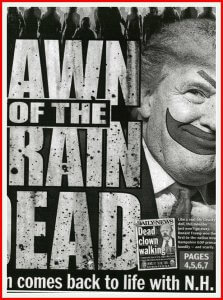 Gerald Beadle, the first Station Director at the BBC in Belfast was appointed by Reith in 1926. Fake News must have been foremost in his mind when he wrote later that year to Reith saying,  “I am sure that our position here will be strengthened immensely if we can persuade the Northern Government to look upon us as their mouthpiece.”    When  Denis Tuohy was appointed to the post of announcer in Belfast in 1960, he was surprised at the end of the interview when  Harry McMullan,  Northern Ireland Head of Programmes , told him, ‘we shall have to let the Regional Controller know that we have appointed a Catholic’.  In fairness to the Corporation, things have changed somewhat in the last 50 years as the current Controller is a Donegal born Catholic.  However, during the fifties and sixties , news was shaped on BBC Northern Ireland in  parallel fashion to its employment policies; we lived in a British state where Dublin did not exist. Trump did not discover Fake News.

Civil Rights marches brought the attention of the World media to the Six Counties; respected journalists like Mary Holland of the Observer and the Times’ Simon Winchester depicted the full horror to the World of what passed for democracy in ‘John Bull’s other Island’.  However, under twenty years of Thatcher, despite the best efforts of a few brave journalists,  what regularly was broadcast was that which had government approval and truth was a frequent casualty. The Director General had instructed  news editors that any proposed current affairs output ‘of a sensitive nature’  had to be referred up. This was a broad sweep policy which included anything which might hint at the legitimacy of nationalist aspiration. Thatcher  expressed her contempt for two particular broadcasts and tried illegally to suppress them  –  a Panorama programme, involving a young Jeremy Paxman,   showed IRA roadblocks in Tyrone and a Thames TV programme which questioned the SAS slaughter of three unarmed Republicans in Gibraltar . Perhaps the most revolting fake news was that which was widely disseminated   in the   aftermath of the Bloody Sunday killings in Derry. The Saville Inquiry confirmed that a fictitious narrative, created immediately after the event by Captain Mike Jackson (  now  General Sir Mike and a former GOC),  became the officially sanitised version for the media. It took 40 years  and £200m to nail that notorious piece of fake news.

Throughout the Scottish Independence Referendum there was a deluge of fake news instigated by the Better Together campaign . The politics of fear had the support of virtually all of the media and , to its shame, the BBC was a willing participant. Its political editor at the time, Nick Robertson , reported a  distorted version of an interview with Alex Salmond which was shown to be untrue when the full footage of the meeting was revealed. YES supporters became so incensed    at the tone of the reporting generally that they picketed BBC HQ in Glasgow.  Those who voted REMAIN on June 23rd last year share the same feelings about the reporting of that referendum  by the media and the daily lies which were presented as facts whether it portrayed the NHS or the actions of the Commission in Brussels.    The irony of the Daily Mail, raging against Supreme Court judges, was apparently lost on journalists who had demanded British justice and an end to Brussels rule.

Fake news has long been with us, taking its place  alongside faithful, accurate and responsible reporting.

Can we tell the difference?