Familiar tramlines for Serena and Venus 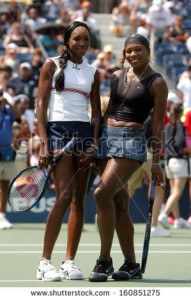 In the introduction to its coverage of Ladies’ Final Day at Wimbledon,  the BBC asked about ten women tennis players to name their idols in the sport.  It was surprising that only two people,  nominated a  Williams  – Serena , who chose her sister, Venus, and Heather Watson, the black British player, opted for Serena. The Williams sisters have dominated the landscape of women’s tennis for the last two decades; on the Championship board at Wimbledon, there has been a Williams’ name  for eleven of the last fifteen years; collectively they have won 28 Grand Slam titles in singles. It is surprising then that only two of those questioned chose a Williams. Could race be a factor? Venus Williams retired injured before a match against   her sister in Indian Wells and the crowd vented its spleen on Serena throughout the Final, booing and making racist taunts even as she held aloft the winner ‘s trophy. Their father, Richard, was racially abused in the stands throughout the match. As a consequence of their treatment, the sisters boycotted the tournament for the next ten years.

In his book, ‘Black and White – The Way I see it’ , Richard Williams writes about the indifference, racism and physical abuse that he suffered as a child growing up in Louisiana; the poverty and violence which were mood music to his early years. That he overcome those obstacles and produced, not one, but two of the World’s greatest women tennis players is something that has not been fully accepted in sections of the media. I can recall BBC pundits mentioning his unconventional behaviour at Wimbledon; Pat Cash and Elena Dementieva hinted at match fixing; some tennis journalists fixated on the word ‘power’ in the sisters’ game  and ignored their multiple other court skills.

Serena won the Ladies’ Championship yesterday in front of a partisan crowd who were on their feet when her young, Spanish opponent made a winning return towards the end of the second set. The commentator wrote it off as typical Wimbledon support for the underdog; perhaps so, especially since she was  a white, European one.

Serena Williams and Novak Djokovic each took home  the top prize of £1.8m. The equal amount for men and women is largely due to the work of Venus Williams who questioned in 2005 why she had won less in prize money for the Ladies’ Title than Roger Federer who had captured the Men’s event. The Wimbledon Board relented and the following year announced that the prize money would be equal for men and women.

Most genuine tennis fans recognise the supreme talent of the Williams sisters and the contribution that they have made to the sport on and off the court. However,  there remains consistent evidence, especially in their own country, that race remains an obstacle for some people in their attitude towards them.