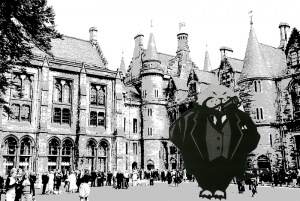 BBC Scotland and various talking heads have spent time this week examining   Scottish education and discussing how funding might be found to close what has become known as  ‘the attainment gap’ ; it has been fairly well documented that children attending schools in better off areas generally are more successful than those in deprived communities. There is wide  agreement that funding needs to be better utilised across the system.

One area where there are apparently no financial constraints  is in the remuneration  of college and university principals.  There was a time when such people saw themselves as academic and curricular leaders and were happy to be paid a little more than other staff to compensate for their additional, administrative responsibilities. Over the last thirty years , however, a new thrusting breed has emerged who   have adopted a familiar,  capitalist model for   pay awards, regarding themselves as captains of the education industry and entitled to the same rewards as their equivalents in the private sector.

Professor Louise Richardson is now Vice Chancellor of Oxford University. In 2014, she was head of St Andrews University and  received a salary of £225 000; lest this might cause her hardship, she received a one-off bonus of £30 000 and about £10 000 in other benefits. In the same year, Professor Sir Jim MacDonald of Strathclyde University had to make do with £334 000. Last year several colleges in Scotland merged;  The former head of Coatbridge College, John Doyle , received a pay-off of £304 000 – that’s  £175000 more than official guidelines. It provoked such a storm that he was summoned to appear before a  Holyrood committee to explain the circumstances of that astonishing deal.  Despite an appeal from the Committee and the First Minister, Mr Doyle has adamantly refused to return any of the money.

Many college and university lecturers  are   given only part time contracts; those on permanent  status are paid between £30 000 to £50 000; professors earn about £70 000. Those at the top justify their inordinate greed by trotting out the same line as the FTSE companies – you have to pay top dollar to get the best.  There is very little public accountability for these enormous salaries which are awarded by intensely secretive remuneration committees. Their actions are almost   entirely arbitrary.

Surely it is time for full public scrutiny of pay awards to management in our third level institutions.