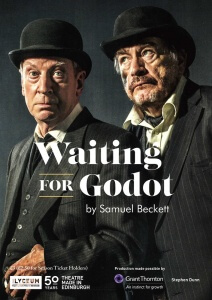 The Lyceum Theatre in Edinburgh celebrates its 50th birthday this year with a season of stellar work. It has been launched with a production of the most significant English language play of the twentieth century,  Samuel Beckett’s ‘ Waiting for Godot’, produced by retiring director, Mark Thomson, who has done much to revitalise   drama in Edinburgh during his thirteen years at this beautiful theatre. The production marks a bravura performance by two of Scotland’s finest actors, Brian Cox and Bill Paterson, as Vladimir and Estragon. We witnessed two seasoned performers at the apex of their craft and who are thoroughly relishing the experience;  they ensured that there was nothing obscure about the writing and   underlined that this play has certainly  not dated at all. The Lyceum audience were very much in tune with the action throughout on a curving, grey, white wilderness of a set.

In their exchanges and care for each other, the principals show great,  moral strength – something  which has largely disappeared from much of British, public life and is long extinct in  Beckett’s Dublin. During the week, I watched a BBC programme about the Dundee Foodbank  which painfully documented long, starving periods of waiting by impoverished people, caught in the trap of what is perversely known as  welfare reform . Pozzo (John Bett), in typical, Bullington Club garb    is Ian Duncan- Smith and the prominent, ideological fist of a right wing, Tory Government; Lucky (Benny Young) is downtrodden Everyman, treated derisively by those in charge and who occasionally, but ineffectively, reacts against his abject subjugation. Beckett was close to Joyce and it is reflected in the wonderful and  surprisingly rhymthic, stream-of-consciousness monologue of Lucky.

This was an outstanding Godot to savour by an appreciative Edinburgh audience and it augurs well for the rest of this anniversary season.