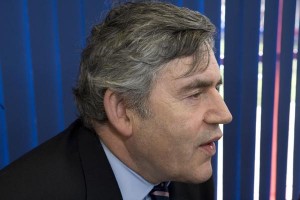 The weekend message from the polls precipitated an unexpected and rushed recalibration of the Better Together Campaign which would not have been out of place in a Whitehall Farce. Had Nick Clegg dropped his trousers in Galashiels today, the picture  would have been complete. However, for now we can make do with the journey of the three worried men to Scotland this morning. Alastair Darling was shoved in front of the cameras to tell anybody,  still listening to him, that there was absolutely no panic . His face and general demeanour told a very  different story. Meanwhile at Westminster, groups of Tories are openly meeting and discussing how they can lever Boris into the House of Commons next week because Cameron has got to go when he loses the Union.

There are serious misgivings about the morality and propriety of this last minute, panic-stricken move since the postal votes of some 200 000 people have already been cast. When questioned, Better Together claim that there has been no infringement of electoral law because the intervention came from Westminster on Sunday with the announcement of new powers by the Chancellor. The UK Government is not a direct participant in the Referendum.  How many Scottish voters could unravel those semantics? Perhaps in time, the Electoral Commission will.

To most people, the intervention came from Fife in the solid shape of Gordon Brown, the ex-Prime Minister. Speaking to Labour supporters in Loanhead, he unveiled a cross-party deal on more powers for the Scottish Parliament and told Labour voters that rejecting separation would quickly lead to a “new Union” which meant that the Scottish Parliament would get extra powers far more quickly than if they voted to leave the union. It  was all wrapped up in Brigadoon imagery with St Andrew’s Day and Burns’ Night identified as key dates in the initiative.

Brown is an old style Labour Party back room deal maker – a fixer. You may recall at the start of the financial crisis that he collared the chairman of Lloyds  during a function and muttered, ‘want to buy a bank.’ The outcome was that Lloyds took on the ailing Bank of Scotland; a deal, I am glad to say, that its shareholders are still paying heavily for. On the Referendum, he has not offered anything concrete, merely a process and a time table  within which it might be agreed. He was at pains to claim that all three major parties were signed up to this. Oh no they are not. Clegg, Milliband and Cameron may have given him a nod but any deal on additional powers would have to be agreed in Parliament and there are many English MPs in both the Labour and Conservative parties for whom such a proposal is anathema and Brown knows it. There is a General Election next year and there will be  no votes in middle  England on Scottish issues. Brown’s promises are without substance and voters must recognise that and reject them. Labour Party supporters can only build a better Scotland by voting YES next Thursday.

It is the conquest of hope over fear.