YES – For my Grandchildren 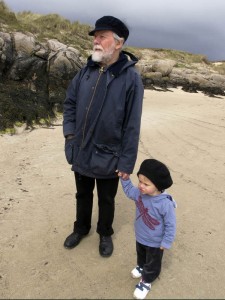 “I heard from  my parents and my grandparents that they wanted this country to be great“; the words of a young woman, interviewed in Kiev by BBC News. She was visiting  the centre of the City to view  the floral memorial to those who have died in the last month and to pay her respects. “These people died for my future“, she added tearfully. On September 18th, the people of Scotland have the opportunity to bring about change in this country through a democratic referendum at the ballot box. We have the chance to build a future for our children and grandchildren by voting ‘YES’. There is a grossly unfair distribution of wealth, power and opportunity in this prosperous land which blights the prospects and potential of many young Scots. Let’s do something about it now.

My wife, Liz, our first-born, Caoimhe and I came to live in Clackmannanshire in 1976 after a  three year spell, working and living in Zambia. We had thoroughly enjoyed our stay in the Tropics and had taken the opportunity to visit a number of other African countries while we were there.  Zambia had gained its independence in 1964 and we were participants in a Government policy to take  education to the rural areas of that vast country.  In retrospect, it was rather like Scottish Devolution. The Government in Lusaka notionally ran the country but the economic levers, the real power, rested in Britain. Zambia was a major source of copper but the price was decided in the London Metal Markets. Holyrood has the power to make political decisions within certain devolved areas such as education, health and transport but is dependent on  Westminster for the finance to implement them.

I will be voting YES on September 18th because I want the people of Scotland, through its chosen Government, to have full, economic control of policy decisions.  This is a wealthy country, as the credit rating agencies have confirmed within the last week; it has considerable resources in both human and material terms. A YES vote in the Referendum will allow the full complement of those riches to be deployed in the interests of all of the people who live here. I spent most of my working life as a teacher in the public sector and I would want a future, independent Scotland to invest in it, fully developing the infrastructure for the benefit of all the people who live here.

The two dominant themes in my life have been education and the distribution of wealth. They are intrinsically linked. The Protestant reformer, John Knox, called for ‘a school in every parish‘ . His call was reiterated by the Act of the  Scottish Parliament in 1696 but was delayed by the Act of Union (1707) until  the Education Scotland Act 1872. I would want a new, independent Scotland to recognise that the needs of children and their education are fundamental to the development of a just and achieving society, whether the child comes from the affluent suburbs, the remote croft or the barren wilderness of our urban areas. The contrast in attitudes to education, north and south of the Border, could not be more stark than it currently is; in Scotland, we are implementing the Curriculum for Excellence which focuses on the child and demands teaching which recognises the diverse ways in which children learn; in England, the Coalition Government is turning the clock back to rote learning and greater emphasis on cramming for examinations. We need an Independent Scotland to ensure that we can implement our own policies and dedicate the required budget to achieve them. Shetland has the finest school provision in Scotland.    Shetland’s access to oil revenues has funded the Shetland Charitable Trust which in turn funds a wide variety of local programmes. The balance of the fund in 2011 was £217million i.e., about £9,500 per head, a microcosm of what might have been achieved nationally and a pointer to the potential  where the resources are managed for the good of all.

I am not a member of any political party, although in my time here I have scattered my votes around most of them with the exception of the Tories. My decision is not a party political one but rather is based on   old fashioned principles of social justice and a nation’s right to self-determination. My three children are grown up and   live and work  in this country. They each have children. It is those grandchildren, Leo, Joseph, Lilly and Senan, who are foremost in my mind, when I consider the future of this country. I have the power in the ballot box to make it a great one for them.

On September 18th, there will be  the chance to create a Scotland where we will take our own future decisions about the kind of society we want to live in.