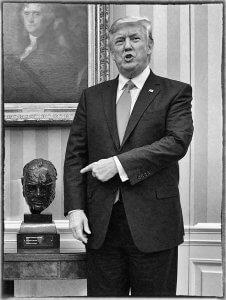 What does one war- monger give another when visiting?  Tony Blair found the ideal present in a bust of the notorious imperialist, Churchill. George W. was duly impressed and the gift was given pride of place in his Oval Office. As American and British forces bombed civilian homes in Baghdad in April 2003, he probably felt the approval of the old rogue; this was his re-enactment of Churchill’s war crimes, most horrifically in Dresden,  where   phosphorus incendiaries clung to the cowering bodies of the innocent, civilian population. It was Churchill’s end-of-war, spiteful revenge on Germany and now George W. was avenging the military failures of his father in the Middle East.

There has been deliberate obfuscation of Obama’s actions when he arrived in the White House. There were actually two busts of Churchill, given to the Presidency; Lyndon Johnson  received one in 1965 and which was  prominently displayed in a corridor throughout  the Obama Presidency. He   replaced the Oval House bust of Churchill with one of Martin Luther King with whom, understandably,  he felt a greater affinity and who is held in very high esteem by most  Americans and throughout the international community.

Trump, with the active connivance of the British Government and   right wing media,  has lied about the statue which was given a visible role during Theresa May’s disastrous visit last week. Trump has much in common with Churchill; his bombastic lying and paranoid narcissism were equalled historically in the tantrums of old Winston, particularly in 1945, when he was defeated in the General Election.

There are many reasons , of course, why Churchill, a white supremacist, should not be displayed anywhere .  Churchill was blooded in Afghanistan where he reported on how they had destroyed the reservoirs , burned crops and slaughtered tribesmen, the Pashtun. He engineered the genocide of Bengal  in 1943 where 4 million Indians died.   His meddling in Iran and Iraq, where he bombed indiscriminately to subdue the local population, allowed Britain to take control of the oil industry there and to lay the seeds for decades of strife in the Middle East.  Death squads, right up to recent times, have been a staple of British Army activity in Ireland; the Black and Tans, a Churchill initiative, were the most notorious of them.

Torture claims, brought by Kenyans, are still being settled in British Courts; Churchill ordered the forced removal of the Kikuyu from their fertile lands and their settlement by Whites; he  condoned the torture of those who resisted and the forcing of 150 000 men, women and children into concentration camps where rape and beatings by English forces were commonplace. The part-Kenyan President Obama has remained silent on these historical attrocities.

The Trump Presidential Campaign had the active support of the KKK and the National Rifle Association; he is a magnet for right wing groups, particularly white supremacists; his Presidency is regarded by them as a political victory for their ideological views. His election is interpreted   as legitimising the white, supremacist argument. They see it as protecting  America by   re-empowering    the white majority. His actions this weekend have underlined their beliefs.

The Churchill bust reflects the mood of the White House.