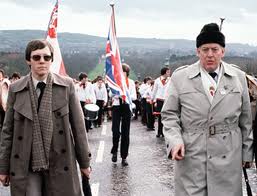 A steady column of journalists and politicians from the Republic of Ireland has been paying tribute to the late Ian Paisley for his pivotal role in the Peace Process. Former Taoiseach, Bertie Aherne, said that he was a big man with a big heart while the current holder of the office, Enda Kenny, said that Dr Paisley treasured the peace that he helped to build. Micheál Martin, leader of Fianna Fáil,   told RTE that the journey he travelled, in many ways, encapsulated the triumph of the peace process and constitutional politics.

There is an accepted and civilised convention that one does not speak ill of the dead and these quoted civic leaders may well have tempered their remarks in that context and to show respect for the Paisley family.  While accepting that Paisley was crucial to agreement at St Andrews in 2006 and the restoration of democratic governance to the Six Counties, we must not forget that he was principally responsible for the wrecking of the Sunningdale plan in 1974 and the Belfast talks of 1998.  Had the former been allowed  to breathe and develop in the 1970s , it is indisputable that hundreds, if not thousands, of lives would have been saved.

For most of his public career, Paisley was the scourge of reconciliation and bullied any Unionist politician who showed  signs of weakness towards nationalism or the  possible granting of democratic rights for the minority population in the North. I remember the fear in parts of Derry when he and his supporters held a meeting in Derry Guildhall in 1969 to protest at minor concessions planned by Terence O’Neill. He was a master of the counter demonstration which was designed solely to frustrate the aims of protest groups and he knew that he could count on the support of the RUC, a considerable number of whom were sympathisers and even members of his Church. The most notorious example of this happened at Burntollet on the outskirts of Derry in January 1969 when Paisleyites ambushed and violently attacked a civil rights march by university students while the RUC looked on.

The concept of  Islamic State is rooted in the   the Islamic Religion. Many will see an analogy with Ian Paisley for whom politics was firmly based on a fundamental interpretation of the Old Testament and biblical teaching. While his outspoken bigotry was contemptuous of Catholics and their rights, he was feared also by Unionists who felt pressured to secure his approval. The Gay and Lesbian community only received legal rights because the legislation was enacted by Westminster and not Stormont.

Martin McGuinness, Sinn Fein, the deputy First-Minister, said yesterday that he had lost a friend with the death of Ian Paisley. It is clear that only big Ian could have brought the DUP to the point where they would join in Government with Sinn Fein. Ironically it would appear from the recent Eamonn O Maille documentary that his good relationship with McGuinness was the principal reason for his removal by the DUP and certainly from the leadership of his own Church by its congregation.

Not much has changed in the DUP.