Ireland where the Past is the Present 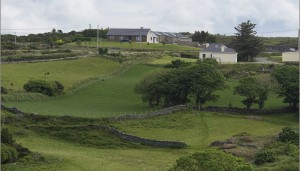 There was a news-clip last week of a young Prince George taking a few stumbling steps in a polo field with his mother watching carefully over him. His father and uncle were , presumably, actively engaged in a chukka. A good part of my childhood was spent playing with my friends in the polo field near our home. It was an expanse of freedom with trenches, a stream, trees and a cricket field over the fence in the Rectory; it adjoined the paupers’ field, next to an old workhouse.  The words, pauper, polo, rectory had no particular overtones for us; these were relatively safe play areas which were within sight or calling distance of our parents. A short term ban on going there was imposed once  when Willis Colhoun was bitten by a rat which  had been inadvertently  trapped under our hut across a trench. In time, I was to learn that the area had been part of a British Army barracks and the polo field had been the officers’ recreation area. Dickens later educated me on the misery of the workhouse. What had been an often idyllic and abiding presence in childhood, was now associated with war, death, poverty and enduring misery.

These long, dormant thoughts of Ireland surfaced earlier this month when we were on holiday there and the news was dominated by the story of the Tuam babies’ graves. In Ireland’s dark past the Catholic Church dictated and enforced its standards of morality, particularly on sexual issues, through Government. Young women who got pregnant outside of marriage were placed in homes, the Magdalene Laundries, the last of which were finally closed in the mid nineties. Irish Catholics were almost universally compliant with this Church terrorism and abandoned their daughters, some of whom were rape victims,  to these horrific institutions where they endured lives of virtual serfdom. There appears to have been little condemnation of the males involved, some of whom were already married or respected community members. The Irish State had characteristically turned a blind eye to the fate of the women and their babies. A committed and courageous, amateur historian, Catherine Corless, was unable to find  burial records of   babies who died in a Tuam Home, run by nuns from the Bon Secours order. It was known that there was a high infant mortality rate in these institutions but her research found little support until the story was reported in a Dublin paper and it revealed that the children were buried unmarked in a small plot near to the building which exponentially acquired the characteristics of a mass grave. The story has unleashed another bout of critical, self examination in Ireland. My good friend, writer and scholar, Jude Collins, argued that any judgement must be made in the context of the prevailing, social mores,    http://www.judecollins.com/2014/06/infant-death-tuam/   There are some who would argue that Apartheid, the Slave Trade and colonial exploitation should be similarly assessed. Some of these parents may still be alive; they and their families will face a lifetime of uncertainty over the final resting place of their babies.

Some may feel that similar attitudes prevailed elsewhere, including here in Scotland. That they existed in places, is undoubtedly true but they did not acquire the support of the State and Churches as happened in Ireland. The recent Mortonhall ‘baby ashes’ scandal was swiftly and convincingly shown to have arisen because of  an absence of meaningful supervision or leadership from senior management in a specific crematorium. Scotland has consistently demonstrated a sensitivity and awareness of the pain in dealing with infant death.

Ireland has some way to go.