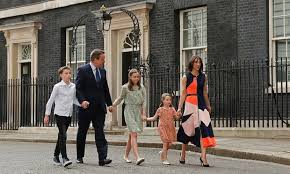 Redundancy payments to Cameron’s political aides, as he left Downing St., are a glaring example of the chasm between the rights of most workers and those of the extremely rich.  Before packing Samantha and   the children off to their new £17m,  you scratch my back,  freebie home in Holland Park , the out-going Prime Minister  demanded that the contractual rules for advisers should be set aside and that they were paid six months’ severance pay  instead of the statutory four .  Cameron claimed that he did not wish to exacerbate an already difficult and uncertain time for his former employees. He was advised against such a move by the Head of the Civil Service, John Manzoni  but the former PM, ignoring legal advice,  used the last vestiges of his authority to insist that it should be done.    Among the recipients involved is Scot, Craig Oliver, son of Ian Oliver, formerly Head Constable of Central Scotland Police which was criticised for granting a gun licence to Thomas Hamilton, despite the recommendations of a junior, female officer against it.     Craig Oliver, Cameron’s Director of Communications, earned £140 000 pa and will thus receive a payment of £70 000.   He and other aides will soon find well paid jobs and possibly significant book deals.

Contrast that with the treatment of  3000 steel  workers in Redcar who lost their jobs and livelihoods. The Cameron Government  showed no concern for the ‘difficult and uncertain time’ faced by these employees and their families  and the effect is certain to be much more prolonged than that which will affect his office boys for a week or two . Indeed , in order to receive a paltry eight weeks’ pay, to which they were entitled, Community Trade Union  was forced to take tribunal action.

There is a long list of workers who have fared very badly in compensation payments over the last twenty years. Thousands of low – paid Woolworth workers lost their fight for redundancy payments in a European Court of Justice Appeal which was backed by the Government. A primary motivation for the Tory Govt in appealing against an earlier judgement in favour of the workers was the future  impact it  might have on any other large business which sought to rationalise.

Around 11000 BHS staff will receive minimal, statutory  redundancy payments and have been told that their pensions  will be cut by an average of 10%. Millionaire David Cameron will receive a PM pension of £40 000 pa, personal security and a specially built Range Rover for life plus  a £20 000 pay off in addition to his £75 000 salary as an MP. A quite different set of orthodoxies obtains in the employment rights of the ruling class.

We are most certainly not all in this together.