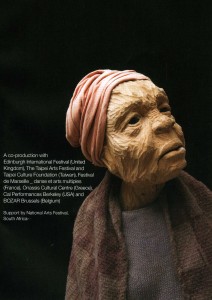 Watching ‘Ubu and the Truth Commission’ at the Edinburgh Festival, it struck me that the individual narratives such as that of Ubu are representative of the national picture. They are each too an essential part of it and must participate. There was a dawning of realisation when Ubu recognises that expiation of his brutal wrong-doing will only happen when he willingly becomes part of the process.   The stories of personal grief, violence, brutality, triumph which enfold are the fabric of pre-Mandela South Africa and are a starting point for the testimonies.

The audience glimpses submissions to the Truth and Reconciliation Commission from back projected images on a screen: police in action at Sharpeville and Soweto; Verwoerd saying ‘Europe will be able to save itself, namely the preservation of the white man and his state’; newspaper headlines  -‘ lawyer murdered by secret police’; Mandela’s trial ; PW Botha and Biko. The middle-aged and older audience around us recognised these images instantly and fully grasped their significance. The testimonies were harrowing transcripts of witnesses who appeared before the Commission.

Outstanding theatre has universality of experience at its core. The back projection screen could easily have conveyed events in Northern Ireland over recent history: ‘Military Reaction Force kill more innocent Catholics’; ‘bomb in Shankhill Road fish shop’; ‘Gerry Adams carries bomber’s coffin’; ‘Paras kill eleven civilians in Ballymurphy’;’slaughter at Dalkey Pentecostal Church’; ‘a Protestant parliament for a Protestant people’. They are interchangeable really and so we might ask  if  there is a possibility of a Truth and Reconciliation Commission in Belfast?

Unlike many other transitional societies, to date, there has not been a similar process in Northern Ireland, largely because there is disagreement as to the players who might be witnesses. Rather like UBU, Unionist politicians refuse to recognise or to admit that their past actions were major contributors to the problem and that continues to be the case. No Unionist politician will condemn the most provocative coat-trailing by Orange parades or even countenance that the Loyal Order is part of the problem. You could add the RUC, the British Army and successive Westminster Governments inter alia to the list. Republicans have shown more willingness to engage with the process although some of their leaders will need to shun the obfuscation that has characterised some of their participation to date.

Reconciliation should be the core aim of any truth process;  respect and generosity should inform the parties seeking to reach agreement.  Ubu finally realised that this approach was fundamental in South Africa. It may be, and for good reason, that some people fear that delving too deeply into the past may re-open old wounds and suffering that have slowly begun to heal. That was equally true of the South African experience but it was clearly recognised  there that no future could be built successfully until the past had been settled.

People can only forgive when they know whom to forgive and for what.