Lessons from Thatcher and Conor Cruise for the Home Secretary 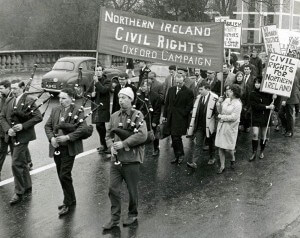 Theresa May has serious Tory leadership ambitions which were germinating long before Cameron intimated that this would be his final term as PM. Some saw the announcement as a clearing of the way for Boris and a shackle method of the London Mayor for the next few years. However, the Home Secretary is nursing her own agenda which has seen her take on the Police Federation, lay out plans to abandon the Human Rights Act and decline British support for migrant settlement. Actions, all judged to appeal to party members and increase her profile as a tough leader. She has also announced plans to place universities under a statutory duty to prevent people from being drawn into terrorism. In effect, universities would have to refer to Government guidance when considering whom they permit to speak on campus. ‘Je suis Charlie, how are you?

In the sixties, I spoke in several British universities on behalf of the Civil Rights Association.  The Minister of Home Affairs in Northern Ireland, Bill Craig,  regularly denounced us as a Republican front for the IRA. At Oxford, I shared a platform with Gerry Fitt, the Republican Labour MP for West Belfast. In Stirling, my hosts sandwiched me between Tariq Ali and Enoch Powell; the latter would certainly fall foul of the law today , if he were to repeat his 1968 Birmingham speech.  However, if Craig had had his way, Fitt and I should not have been given the opportunity to present our views on what passed for  political thinking in Northern Ireland.

Theresa May would like to see the introduction of pre-broadcasting banning orders; the catalyst for this was a BBC Newsnight interview with the radical Islamist, Anjem Choudry, which ignited the Tory Right as it occurred in the aftermath of the murder of Drummer Rigby. She would like to make Ofcom take on a censorship role in addition to its regulatory duties. Some of you will remember the farcical eighties when actors read the spoken words in broadcast interviews with Republicans This was the media  interpretation of Thatcher’s ‘oxygen of publicity’ strategy which caused a journalists’ strike and the eventual sacking of the Director General, Alisdair Milne. Thatcher’s policy was seen to be clearly redundant in 1982 when Sinn Fein got 35% of the nationalist vote and 5 seats in the poll for ‘rolling devolution’ under Jim Prior. A year later in the Westminster elections, its share had increased to 45% and Gerry Adams took the West Belfast seat. The results stunned not just the British media but the Irish as well; special category status was phased out, internment ended and the courts overflowed.

Conor Cruise O’Brien   amended the Broadcasting Act  to prevent interviews with persons, identified as Republicans, in any circumstances; he even tried to extend the measure to the Press but, following opposition from the public, he was forced to withdraw. O’ Brien’s antics provoked utter ridicule when it encroached on an industrial dispute in a bakery. The trade union spokesman, Larry O’Toole, was a member of Sinn Fein and so under the new broadcasting edict, he could not be interviewed on air. In an appeal to the High Court, O’Toole won. Surprisingly, although Conor Cruise was the arch revisionist of Irish history, his belief that politically Ireland consisted only of nationalists and unionists  and that they were deserving of equal respect, is now the guiding philosophy of both  the Irish   Government and the Opposition. In the heady days after the Battle of the Bogside, Conor Cruise came to Derry; a joyous, abiding memory for many is Paddy ‘Bogside’ Derry ordering him to leave his home and the City.

Theresa May should learn from recent history.