Welcome to Lily Ann and all babies everywhere 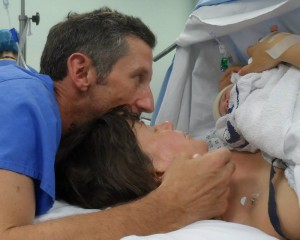 The quotation is from  “Riders to the Sea”, Synge’s   lyrical depiction of  a careworn mother and her hopeless struggle with the sea. Our youngest child, Fiona,  gave birth to her first daughter, after a demanding labour, this week and I thought of those lines from a favourite play, a one act tragedy. All is now joy and rejoicing for us on this Father’s Day but we must not forget the pain and anxiety endured by the women that preceded our entry into this World.

Our first child, Caoimhe, was born in Zambia. The nearest hospital with trained maternity staff and a doctor was 40 miles away – 7 miles of strip tar and the remainder a sand track through the bush.  Her arrival was signalled about 2.30 am and I first had to organise a vehicle swap for a high clearance pick-up as my saloon car had previously got stuck in dry sand at the end of the rainy season. My poor wife, Liz,  sat in agony in the cab beside me throughout a tortuous journey. Our daughter was born 30 minutes after we arrived  – the nearest I have come to being a midwife. Caoimhe was the first European to have been born there in three years. Spontaneous applause in the maternity ward greeted her first little cry, one of the most joyous moments in my life.

Neill, our second born, was delivered in Stirling Royal Infirmary with clinical efficiency but somehow we felt that it lacked the warmth of the Luampa experience in Zambia. I phoned my parents to let them have the news and my father responded with predictable, Irish male wisdom, “that’s great; it doesn’t matter what all the others are now.”

I was a primary school classroom teacher in February 1980 when Fiona decided to arrive. Wednesday afternoon was sports time for the upper school and I was refereeing a soccer game when my headteacher came rushing  on to the park to inform me  to get home quickly because “things were happening”. Fiona was born a couple of hours later but I never found out the outcome of that game. What  guidance does the SFA give refs in such circumstances? Perhaps the HT intervention was a pitch invasion, causing the game to be abandoned.

I know that I was born in my grandfather’s home in Derry. The redoubtable Nurse Doherty took charge of events on the day ; a service that she was frequently called upon to perform in that community. That’s  the sum total of my knowledge of the occasion. Those things were not talked about much  in our family  .

Céad míle fáilte then,  to little Lily Ann on Father’s Day and a special tribute to her dad, Mark , whose support of Fiona throughout the ordeal was total and modestly understated.

On this day too, let’s salute mothers everywhere.