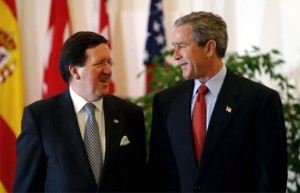 Consistency, in some respects, is an admirable trait in a politician. Lord George Robertson, former Labour Secretary for Defence and  Secretary General of NATO, has been consistent in his views of World Power –  consistently wrong. Last night he spoke in Washington at the Brookings Institute and delivered an address, redolent with all the old clichés of the Cold War. George belongs to that  mouldy clique of  Labour reactionaries who are impermeable to doubt  and are almost always wrong.

Devoid of any sense of  hyperbole, he told his American audience that a vote for Independence would threaten the stability of the wider World; not one to mince his words or exaggerate, he described such an outcome as ‘cataclysmic in era of international turmoil.’ Well, he would have clear knowledge of threats to World peace since he was NATO Secretary General  when his close, political ally, Tony Blair, waged an illegal war in Iraq which caused the deaths of thousands of innocent civilians, mainly women and children and has subsequently lead to the de-stabilisation of the entire region.  That’s when the ‘forces of darkness’, to which he also alluded last night, were at their  most heinously malevolent .

The speech was reminiscent of the old Reagan excesses. The former Secretary General  tellingly neglected to remind  his audience, that the SNP, in a policy u-turn last year, which dismayed many of its core support, committed an Independent Scotland to continued membership of NATO. It will almost certainly entail the retention of Trident nuclear weapons in Scotland.

The Brookings Institute, Lord Robertson’s host, is a Washington think tank, dedicated to the security and opportunity of all Americans and is frequently referenced by the American Right. It has a record of slavishly supporting American foreign policy and threw its weight, in particular, behind that of the Bush administration.   George was speaking, therefore, to an uncritical audience and he certainly produced what they wanted to hear.

George, like many Blairites, is impervious to embarrassment. In 1995,when he was Shadow Secretary of State for Scotland, Robertson said, ‘Devolution will kill Nationalism stone dead.’ It is now generally agreed by all political commentators that, regardless of the outcome of the vote on September 18th, the SNP will continue its dominance of Scottish politics for many years to come.

Wrong again this time, George but consistent or should that be dogged.