Loss of a Titan, Paddy Doherty 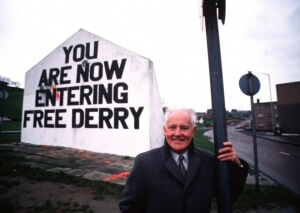 Paddy Doherty devoted  a lifetime of service to the people of Derry and beyond in the West Indies and Latin America.   His contribution to the early  credit union movement  has made life immensely better for individuals, families and communities, not just in his native Derry but across the whole of the Island.  Leadership was called for in the civil rights movement and Paddy, untainted by political association, emerged as a force which could unite and be listened to with respect. My older brother, Jim,  notes ,

”  Isn’t it interesting that , at times of political and social turmoil, natural leaders always emerge. The city was fortunate in having Bogside to take a leadership role.”

Eamonn Mc Cann and I sought new debating challenges outside of school and as sixteen year olds were given exceptional membership of the Colmcille Debating Society. Paddy saw us as protegies, something that was frequently discernible  in his dealings with younger people throughout his life. Shortly after I returned to the City to teach, following  four  student years in Belfast, he invited me to join the Board of the  nascent Derry Credit Union –  ’Time to do something useful with your life’, was Paddy’s blunt encouragement.   It probably was a life defining moment. After a few intense meetings in the Rossville Hall, it became apparent that my co-option had been a Doherty choreographed succession plan as the current Secretary, Henry Heaney, was leaving the City to take up a post at Queen’s University.  Henry would later spend twenty years as Librarian at the University of Glasgow, where he held the prized title,  ‘Keeper of the Hunterian Books and Manuscripts.’

We were both members of the Citizens’ Action Committee where Paddy was fearless in debate and on the streets. On 18 November 1969, he took charge of marshalling a huge demonstration (25 000 people)  which the RUC had stupidly halted on Craigavon Bridge. He exhibited his finest qualities that day in a perilous situation – coolness, decisiveness and demanding  of total respect.

Paddy was a man of the highest integrity but possessed a street cunning which served him well on many occasions. His rhetorical skills, with the possible exception of McCann, were peerless and he knew how best to use them to advantage. He was generous in recognising the qualities of colleagues and inspiring productive use of them. He invited me to the Mercier Press launch of his memoirs and signed it ‘To John, an inspiration to me and to many others’. My son, a shy, young man, invited Paddy to speak at a Human Rights Documentary Film Festival in Glasgow and , of course, he wowed the audience with his wit and wealth of stories. Paddy noted dormant qualities in  Neill and told him, ‘don’t hide your light away’. Advice to which Neill has responded well and still values.

One of my oldest and closest friends, Paddy was an inspiration to me and to many; a man of great moral conviction, enduring courage, civic vision and nursed  a lifelong commitment to making life better for his countrymen and particularly for that of his fellow citizens. His place in the history of Derry and of Ireland is assured; a final ambition,  to erect a Statue of Liberty-like monument to Colmcille, was thankfully never realised but the work that he did for the City and for its people will long endure.

Deepest condolences to Eileen and to each of his family.