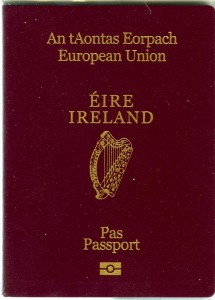 I have held an Irish passport for all of my adult life, although I have not lived there since 1971. Ireland shaped me and  I hope that  I remain today essentially an Irish person, albeit one  probably  modified by the cultural influence of other countries where I have worked and studied.  On my passport, the Minister for Foreign Affairs confirms my status as an Irish citizen with all the entitlements which are consequently endowed . I have , of course, developed a sense of affinity with my host country which has made me very welcome in the generous, tolerant way of the Scots. I was elected President of the Educational Institute of Scotland whose 55 000 members make it the largest wholly Scottish-based trade union in the country and one of its oldest. Neither the media nor the members regarded me as a foreigner in that position.

This introspection was prompted by an interview on Radio Scotland this morning with Margaret Curran, MP, Shadow Secretary of State For Scotland. She had got hold of some early  figures from the 2011 Census which apparently show that there are roughly 730 000 Scottish born people living in England.  In her view, a ‘YES’ vote in the Referendum would mean that these people would no longer be seen as citizens of Britain but as foreigners because an independent Scotland would be viewed as a foreign country. Her son, she fears, might be seen as one of these foreigners as he is currently a student in an English university. Do I detect some latent xenophobia in the lady?  Perversely, she registered no concern about her own status, although  she is one of a number of Scottish MPs, who profess their commitment to a Scottish Parliament but have bolted to Westminster when the opportunity arose.

I have never thought of England or Scotland as  foreign countries; indeed, following  formation of the EU, I suspect that most of us today  would not say we were abroad,  if we had just spent a holiday in Tuscany , Normandy or Catalonia. I have friends who were recently  holidaying in Costa Rica – now that is abroad .  My wife and I worked for  three years in Zambia and I would describe that  as a foreign experience in a different climate zone and with a distinct culture and multitude of languages. Scotland, and the Edinburgh Festival in particular, attract a lot of tourists, some of whom would be regarded as foreigners  because they hail from lands firth of these shores – Japan, China, etc. However, when Tommy Tiernan or Jason Byrne appear on the Comedy Fringe the audiences don’t regard them as foreign performers. Two of my children were born here in Scotland but the oldest arrived when we were in Zambia, produce of a Scottish mother and  Irish father. All three  proudly regard themselves as Scots but Caoimhe may fail the Margaret Curran test.

The truth, of course, is that the ‘Better Together’ campaign is a bizarrely indisciplined one. In theory, it unites the Tories, LibDems and Labour in asserting the benefits of remaining  part of the United Kingdom and in  being British. In practice, each constituent part does its own  thing.  Thus we saw Gordon Brown blasting his erstwhile partners , the Conservatives, when he launched ‘United with Labour’ last week. Alistair Darling, the notional head of  ‘Better Together ‘ ,  must have cringed, if he listened to the Shadow Secretary’s ramblings this morning and the suffering would certainly have  increased with Professor Tom Devine’s forensic demolition of her argument on the same programme.