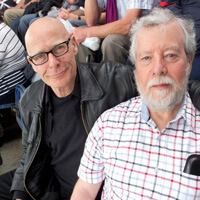 The LibDem  vote crumbled; the SNP want all of the YES votes as well as from those whose minds have been changed since the Referendum; the Tories believe that the Labour vote is vulnerable; you should not split the Unionist vote .

Psephologists and journalists often assume, for convenience sake, that blocks of votes belong to a particular, political grouping. Since the foundation of the partitioned state of Northern Ireland, it has been determined along crude, sectarian boundaries, albeit that there may nowadays be a degree of splintering within those monoliths. In the elections to the Northern Ireland Assembly, the only genuine challenge to these assumptions is being mounted by those candidates standing on ‘People Before Profit ‘ platforms.  They solely seem to recognise that votes are not the property of any political grouping; it is the  individual right of people to make choices in the polling booths .

I have known Eamonn McCann for more than sixty years and place a high value on our continuing friendship. Since I live permanently in Scotland, I will not have a vote in these Assembly elections.  However, as an onlooker with strong family and emotional attachment to Derry, it is evident to me that there is one candidate whose well  documented commitment to human rights and the welfare of working class people  is outstandingly apparent  and that clearly is  Eamonn McCann.

When he joined with other members of the Derry Housing Action Committee in pushing a caravan across Hamilton Street in 1967, he was planting the seeds for social action which would soon see people demand their rights  throughout the Six Counties.  McCann and his fellow activists were seeking justice for the whole working class population, Catholic and Protestant; they were not hidebound by the Orange and Green insignia which tragically persist into 2016 and are wickedly  exploited by political factions on both sides of the divide. They wanted real change then and their demands remain constant as the Northern star.

Whenever I return to Derry, I see paltry evidence of  real change which benefits the whole people of the City.  The old Nationalist party, Unionists,  SDLP and Sinn Fein  have failed  to deliver for them.

Eamonn has been honoured as a consistent, campaigning journalist by his peers; he is widely recognised as one of the most capable public speakers in these islands; he has one of the finest political brains in the Country.  A moribund  Assembly would certainly be resuscitated with his election and the voice of working people would finally  be  heard  in Stormont. A great many voters in the south have already recognised that independents offer some hope of an improvement in the plight of people who were betrayed by Fianna Fáil and further punished by Fine Gael.   People before Profit  has made already  progress there and inspired swathes of the electorate.

You can trust Eamonn  McCann.

Use that arbiter to assess each of the other candidates.