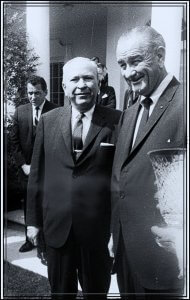 Our group of Irish teachers who met President Lyndon Johnson in the White House Rose Garden  in July 1967, witnessed a  morose, brooding giant of a man who was being rent asunder by the casualties in Vietnam and the growing protests on the campus across the country. He graciously accepted our gift of Waterford glass, listened to the course director’s description of our work in the university but he had little time for small talk. At that point, it was still expected that he would stand for re-election the next year.

He has had a very bad press but,  thanks to his brilliant biographer, Robert T. Caro , some of the lies and misunderstandings about this fine liberal have been corrected.  He was treated outrageously as Vice – President by the Brahmin  Kennedys, particularly so by the Attorney General, Robert who jhad his brother’s ear. Johnson was  probably the only genuinely working-class President in the last century, working his way through college by picking grapes alongside Mexican workers in Southern Texas.  It was knowledge of the legislature which he amassed  over many years as Majority Leader which translated the Kennedy Civil Rights bill into law, changing the life chances of African Americans  irrevocably . Other Kennedy proposals which were hopelessly log-jammed in    Congress were propelled by him on to the Statute book.

A week after the Bloody Sunday in Selma, Alabama, when state and local police attacked voting rights protesters with billy clubs and tear gas, LBJ went to Congress to ask it to pass a bill enshrining Voting Rights.

This was Johnson’s second try at voting rights. Congress stripped voting rights provisions out of the Civil Rights act Johnson secured in the wake of Kennedy’s assassination (as sure a sign as any that the assassination had not made these issues a cakewalk for the new president).

In a remarkable speech, Johnson placed the African-American struggle for equal rights in the wider context of the American struggle for liberty. In adopting the movement’s most prominent slogan, no one would be left wondering if there was any space between his views as a Southern Democrat (synonymous at the time with restrictions on African Americans) and the civil rights movement: