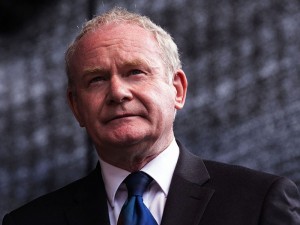 There is an amusing cartoon doing the rounds, where the characters speculate on the possibility of the  Republic of Ireland   rejoining the Commonwealth in the aftermath of last week’s State Visit by an t-Uachtarán, Michael D.  I suspect that there are Georgian drawing rooms in Dublin where that idea is not enthusiastically  dismissed as entirely apochryphal. In the summer, the well heeled will flock to the ‘Royal’ Dublin Horse Show and some may belong to the ‘Royal’ College of Surgeons (Ireland). What the British referred to as Eire,  effectively left the Commonwealth in 1948 when the Taoiseach, John Costello, announced in the course of  a visit to Canada that the 26 counties would become a republic. The Republic of Ireland Act 1948 provided for the abolition of the  functions of the King but perhaps more importantly, the British Act of 1949 declared the constitutional integrity of Northern Ireland as part of the United Kingdom.

The Scottish electorate will decide in September whether it accepts the present constitutional position or if it wishes to establish a self-governing state, retaining the Monarch, where decisions, affecting the lives of ordinary people,  will be taken in Edinburgh and not in London. Assessment of cultural links, mores, currency and public service provision will be the keystones of that decision which increasingly looks like producing a YES answer. As the writer, Joseph O’Connor said last week, ‘the nineteenth century vision of Britain doesn’t exist anymore and it hasn’t for centuries’. I have lived in Scotland for over forty years; I am not  Scottish but I certainly empathise with the sensitivities and sensibilities of the people of this country. My passport describes me as an Irish citizen and I have never regarded myself as even remotely British, despite my birth in Northern Ireland.

There are many   residents of  Northern Ireland, who would like to see the country re-united. Sinn Féin, whose raison d’être is the establishment of a United Ireland, is the largest political party on both sides of the Border. At a time of painful austerity for many in both Ireland and England, the ostentatious display of wealth, privilege and power   throughout  the  State Visit seemed to cause little embarrassment for the main participants. Was there no possible irony for Eamonn Gilmore, Leader of the Irish Labour Party and Tanáiste (Deputy Prime Minister)  that he was the guest of a family which existed exclusively on State benefits but whose personal wealth far exceeded the GDP of many small republics?

The only irritant for much of the media in both countries was the presence at the State Banquet of Northern Ireland’s  Deputy First Minister, Martin McGuinness, a committed anti-partitionist. In his own words, he has said that he was a Republican before he met the Queen and still remains one. The hostility to McGuiness is at its most marked in the Dublin media and was at its apex when he ran against Higgins and five others in the Presidential Elections of 2012. The Irish Republic emerged in the wake of an armed uprising against the British presence in Ireland and its first political leaders were combatants in that insurrection. Indeed, many of the current members of the Dáil have strong family links to the IRA which fought in that struggle and in the Civil War which followed. The politician, McGuinness, has emerged from the same defining ethos but in a different era. To the uncommitted  and foreign observers, they must find the logic of the belligerence towards McGuinness baffling and  elusive.

‘Do not mention the Border’ headlined in bold font the briefing notes handed out to the entourage at Dublin Airport.