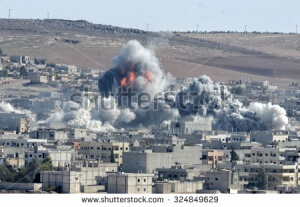 BBC Political Editor, Laura Kernssberg , has assured us that each MP wrestled with  the decision before voting on the War motion in the Commons.  The Glasgow woman is absolutely right ;  from the moment they are elected, the one question MPs automatically ask themselves is – ‘what are the implications of this for my re-election’. It is assuredly the single most persistent thought that guides their every public interaction.  Issues of principle, and as we saw on Wednesday, political and party allegiance are secondary considerations.

Civilian casualties will barely merit a mention; it is expected and timidly accepted in times of war that reporting will be largely restricted to the operational detail , supplied  by the MOD. From past experience and particularly in Ireland, we know that this is routinely fabricated, distorted  and  quite plainly untruthful. The UN estimates that there have been 200 000 casualties to date in Syria, largely resulting from the actions of the Assad regime but not exclusively so.  It is believed that 8000 of those have been children. The battle  lines in urban areas between   Government forces and insurgents have remained unchanged despite two months of intensive bombing by Russia. However, Putin’s bombers have managed to destroy the National Hospital in Raqqa and cut the City’s water supply.

Cameron failed to convince most military strategists that he knows whom they are fighting and what is the purpose of Britain’s  involvement in the bombing. Unfortunately, many of those in the House are still infected by notions of Empire which is the subtext of Cameron’s ‘to protect our values and our way of life.’ They are joining with the US,  France and Russia , all imperialist powers. As we mourned those who died in Paris last month, some like Irish journalist, Eamonn McCann, reminded us of the last and most recent slaughter of innocent civilians in the French capital, a horrific display of colonial might; ‘probably the deadliest violence to strike France since 1945 was the mass killing of Algerians by Parisian police in 1961…nobody bothered to count but the dead were estimated to number between 100 to 300.’   To observers,  the most bewildering thing about Wednesday’s debate was that  nobody seemed entirely sure of whom or what they were going to bomb; indeed they could not  even decide what the enemy was called.

What is beyond doubt is that there will be mounting civilian casualties – men, women and children  who are already suffering under the terror of the brutal Assad regime. We will be told piously that high precision weapons have targeted oil fields, military installations, IS headquarters and so forth.

All damned  lies and propaganda.