Mike Russell in the Lions’Den 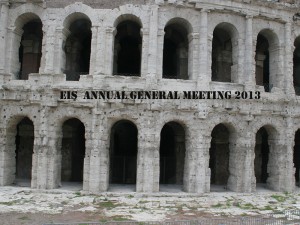 The Scottish Education Secretary, Michael Russell, MSP, yesterday  addressed  the AGM of the  Educational Institute of Scotland.  He is a man impermeable to doubt, possessing a rhetorical style that suggests he learned compound verbs on his mother’s knee before he learned to walk. However, in the presence of all these teachers yesterday, some of them heidies,  he seems to have been on his best behaviour.

Unlike teaching unions elsewhere in these islands, the EIS does not ask politicians to attend its annual meeting. When I was President, it was a struggle coaxing colleagues to agree to   an invitation to Sam Galbraith, Labour Minister for Children in the Scottish Executive, to attend a pre-Conference dinner.   Sam, a former neurosurgeon, was well regarded by many members and there were fears that a minority  of delegates might not behave courteously to our ministerial guest. In the event, he attended the function which is generally a light-hearted,  social occasion and he thoroughly enjoyed himself.

Things are done much differently in Ireland where I witnessed INTO General Secretary, Joe O’Toole, briefing  Education Minister,  Michael Martin, on the content of his speech to an AGM.

Crafty old Mike came into the lions’ den to tell the spectators some of what they wanted to hear; the Education Secretary said Curriculum for Excellence (CfE) was designed to bring “clarity” and that schools, head teachers and councils should not surround this with “a smokescreen of bureaucracy and unnecessary paperwork”. He will order HM Inspectorate to eliminate excessive planning, recording and reporting practices. Well, let’s wait and see how well the mandarins carry out their political master’s wishes.

I sat in a meeting with  the late Donald Dewar, then Scottish Secretary of State and the formidable Education  Secretary, Helen Liddell, accompanied by the top honchos in the Inspectorate, when similar views were expressed and a way forward agreed upon. In practice, however, there was little attitudinal change  noted in the  Securitate who arrived to conduct school inspections.

My dealings with the Financial Services Authority (FSA) reflected similar failures in implementing agreed policy at operational level. As a representative of the Scottish Credit Union movement, I regularly sat in meetings with senior officials in Canary Wharf where it was agreed that regulation of credit unions should be proportionate to their financial size and  be mindful that it was for the most part a voluntary body without the resources of large corporations. Nevertheless, credit union volunteers continually reported bureaucratic bullying in their day-to-day work   by FSA staff.

The cynical might suspect that these agreements were merely PR stunts. I would prefer to believe that the information does not percolate from top management to those charged with the implementation of policy. I shall await with interest the first  Inspectorate report on a school which criticises a zealot head teacher’s enthusiasm for paperwork.

That truly would be a first.