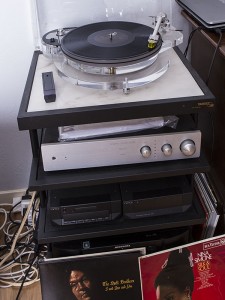 I bought my first record in 1958 when I was sixteen; it was ‘Rave On’ by Buddy Holly, a 45rpm single which I think cost six shillings (30p). I played it on a Dansette  with a record changer, as they were then known, made in Derry by BSR.  It was a fairly revolutionary product which could stack, select and play different types of record – LPs, 45s and 78s. BSR, founded by a Scot, Daniel MacDonald, is significant as an early example of mobile capitalism which viewed labour as a commodity. In return for significant rates and initial tax concessions, he established a factory in Blighs Lane, employing a pool of cheap Derry labour on the assembly lines. At the end of seven years when the taxation position was normalised, he closed the plant and moved to the new town of East Kilbride in Scotland where similar incentives were on offer. The effect on  bleak Derry employment prospects was devastating.

Let’s get back to the music. Rock ‘n’ Roll arrived in the fifties with artists such as Jerry Lee Lewis, Buddy Holly, Little Richard and Elvis Presley making a huge impact on our generation. Most of us had no money to buy records but Radio Luxemburg gave us access to what we wanted to hear. Chart listings began there but the figures were first compiled, not from record sales but from those of sheet music. I used to write out the TopTwenty on  Sunday evening and bring it to school for those few boarders who were interested.      Lack of funds did not stop us dropping in to Phillips’ record shop on Shipquay street to browse; it was the formation of a lifetime habit.  Woolworths marketed its own cheap Embassy label, covers by second rate British artists of American hits. Few young people were tempted but the older generation indulged themselves with samples of what today would be called easy listening. Bizarrely, an Embassy version of ‘Stupid Cupid’ outsold the original American Connie Francis hit.

Over the years my tastes have become increasingly eclectic. In 1967, while searching for records of Martin Luther King speeches in a New York music emporium, the owner surprised me with a free copy of an old 78 – “this is the first recording ever of Danny Boy”. It was on the HMV Victor label and featured Eric Aldridge and the Victor Orchestra playing ‘An Irish Tune from County Derry’. It is still here    but  unplayed because my current record deck only manages LPs.

The independent record shop gradually disappeared with the arrival of the megastores but they too have now gone – victims of iTunes and downloads. There has been renewed interest in vinyl, particularly among young people and some stores remain to meet that demand. One of my favourites is the exotically named Elvis Shakespeare in Edinburgh where there is a wide range of well cared for LPs of all genres to sample. The owner, David, is extremely knowledgeable, helpful and a cup of coffee and a blether is always on offer.

Saturday is National Record Shop day so why not seek one out in your area.