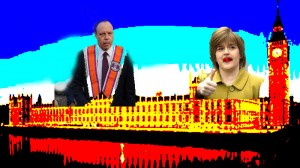 Andrew Rawnsley, the respected Observer columnist , suggested a couple of weeks ago that Nigel Dodds could well decide who the next UK Prime Minister will be. Nigel who, you may well ask – are there two of them. Dodds is second in command in the DUP and their leader at Westminster; he has all the charisma of a bin liner and is known to Ian Paisley’s widow as ‘that sod, Dodds’. The Observer piece speculated that the men of ‘Ulster’ (Six Counties) could have a crucial role to play in a  widely predicted, hung Parliament after the May Election and the word is that  David Cameron has entertained them in No 10. I felt on reading it  that Rawnsley was displaying a worrying ignorance of Scottish politics since the Referendum; an ICM poll in today’s Guardian predicts a ‘bloodbath’ for Labour with the SNP taking as many as 45 seats;      http://www.theguardian.com/uk-news/2014/dec/26/labour-bloodbath-scotland-general-election-2015-snp-westminster

There are only 18 seats in Northern Ireland and currently the DUP holds a mere 8 of those and is unlikely to add to that total. The SNP, on the other hand, following the Election, could be one of the largest parties in Westminster and would dictate business to whatever Party was in power.

Let’s consider,  for a moment, what life would mean for any grouping doing business with the DUP. The party, founded by Ian Paisley, is an expedient  amalgam of religion and politics; it lacks the sophistication of the evangelical, Republican Tea Party.  In crude terms, many of its representatives, and those who support them, hate Catholics and all things ‘Irish’; the sectarian Orange Order still has a controlling influence on policy and a guaranteed seat at the table during important negotiations; one branch, to underline its importance,  recently threatened the expulsion of the Northern Ireland First Minister, Peter Robinson, when he attended the funeral Mass of a police man, murdered by dissident republicans; one DUP MP in the last month said that he would wipe his backside with any Assembly Paper on the Irish Language; they are obsessed with a fundamentalist view of homosexuality and it took a European Court of Human Rights decision in 1982 to legalise same sex activity between consenting adults in Northern Ireland, some 15 years after the law was amended in Britain.  Social Policy would present daunting hurdles for any party proposing to do business with the DUP. Ask Ricard Haass, the US President’s special envoy, who drafted 7 papers on resolving historical issues in Northern and all were rejected by the Unionists as too conciliatory to Republicans and Nationalists who comprise nearly 50% of the population.

The SNP would not join in any coalition but would have a dominant policy position in the House and the prospect of another referendum on Scottish Independence would be at the heart of it.

Rawnsley should have paid more attention to Nicola Sturgeon rather than to ‘that sod, Dodds’.