The Pandas, the Queen and Martin McGuinness 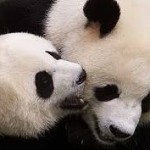 The arrival of the giant pandas, Tian Tian and Yang Guang, at Edinburgh Zoo in November 2011 capped a magnificent year for the SNP in Scotland. Underlining its importance, First Minister, Alex Salmond, said it symbolised Scotland’s ever growing relationship with the People’s Republic of China. He repaid the favour to Beijing when he eschewed any meetings with the Dalai  Lama during his visit to the Scottish Parliament last Spring.

For the last six weeks, there has been a Panda reality show at the zoo, if media interest is an indicator. According to Peter McMahon of the Scotsman, pandas sell papers on a scale similar to that of Princess Diana. Apparently, there is only an annual 36 hour opportunity for these great beasts to mate and reproduce. Daytime audiences deserted Jeremy Kyle to log on to the panda enclosure webcam.   However, it was all a bit of an anti-climax. Although, according to Zoo officials, the male, Yang Guang, was up for it, he was spurned by Tian Tian. They have now resorted to artificial insemination, some of it from her mate but a portion also from a dead German panda, Bao Bao.  There’s a crafty, political mix which will keep Angela onside, if there’s talking to be done in Europe post-Referendum.

It was all reminiscent of the Queen’s Jubilee visit to Belfast when the media was again in ‘Will She? Won’t She?’ frenzy. The Queen has had a pretty boring day-job for sixty years and I suspect that she was quietly elated at the chance to meet Martin and shake his hand, not once but twice. Remarkably, she was meeting somebody with real, three dimensional history, a man who shared her family interest in guns. And let’s face it at those long, tedious dinner parties it’s a much more frisson-inducing  conversation piece pour les grandes dames that one met Martin McGuinness,  rather than Bruce Forsyth or the Lord Mayor of Sheffield.

There are some who say that the cost of the project, £600 000 annually over 10 years, is excessive .  The Royal Zoological Society of Scotland, a not-for-profit body, claims that ticket sales have increased by 50% since the Pandas arrived and that the extra money will allow it to engage in other conservation work such as research into the plight of Britain’s most endangered species and its rarest mammal, the Scottish Wildcat.

If you can believe George Osborne and the Daily Mail, an independent Scotland might have a currency problem. Apparently, the Bank of England, in Tian Tian-like mode,  may not wish to engage in monetary union with us. Perhaps our wily First Minister is considering adoption of the Chinese currency. He doesn’t have to pander to Whitehall. I can just hear it in the Barras:

“only twa yuan for that yin”