Private Jetties and Right To Roam 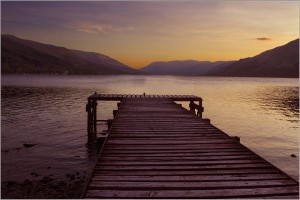 Liz and I took advantage of the fine weather with a short break at St. Fillans on  the eastern shore of Loch Earn this week. One afternoon, we sat by the Loch , enthralled as a pair of osprey dived and fished in great swoops for over forty minutes.  My camera was in the hotel but anyway I had only brought one short, wide angle lens and so the display could be enjoyed without the distraction of photography. Afterwards, I took a walk along the shoreline and stood on a jetty to watch a solitary mallard swimming by; a young woman, late teens – early twenties, was canoeing about ten metres away.  Drawing alongside, she told me in a cut glass accent, “This is a private jetty”. Slightly embarrassed, I moved on without protest

Along the shoreline, there is a  number of these private jetties, including at the hotel where we were staying. It is acceptable that boat people may own the structures in the Loch but many of these have locked gates, preventing general access to the shore. For centuries, the public have had the right to roam the landscape in Scotland – a tradition linked to the freedom to wander at will known as ‘stravaiging’. This is significantly different to the access permitted in England and Wales, where – even under the new Right to Roam legislation – the public (on foot) have free access only to ‘open country’ (not woodland). In Scotland the public are free to wander anywhere, except in places where they are specifically excluded and this is usually for reasons of their own safety such as in the  vicinity of powerful, electrical installations etc.

My young acquaintance probably believes that her class have an inalienable right to private  ownership and, unfortunately, in many places that is the accepted status quo. However, my understanding of the 2003 ‘Right to Roam’ Legislation (Scotland) allows the rambler free access to loch shores and most other areas of Scotland.

I should have challenged the young imperialist.