Putin is a soft target 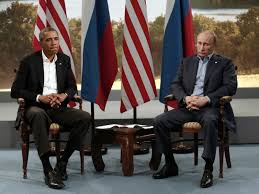 It would truly be a very brittle heart that was not moved to sympathy for the relatives of all those who died on the Malaysian flight which plummeted to earth on the  sunflower fields  around Donetsk . That emotion will be  felt deeply too by the Russian people and by the population of Eastern Ukraine.

The West has been quick to blame President Putin. The argument is that the missile was most likely fired by pro-Russian separatists in Eastern Ukraine and their weapons were supplied by Moscow. The media here has depicted the Russian leader as the epitome of all evil while the West represents all that is virtuous in the World. We are being fed a view of the Ukrainian conflict in tabloidese. If we are talking about a new Cold War, then there are two sides whose ambitions have clashed with horrific consequences for the passengers and crew on board Flight MH17.

The Ukraine has always been a delicate issue for Russia and the Americans should know it. The ultra-nationalists who fought with Hitler killed 30 000 Russian soldiers; the animosity did not disappear with the end of the War because the US and its allies have continued to give support to nationalist unrest in the Baltic areas and Western Ukraine. The US spent $5 billion there to “install a good form of democracy.” That’s Obama speak for an administration that would open its doors unquestioningly to Western capitalism. But in a recent article, published by Global Research, Bill Van Auken identified the “good democrats” the U.S. has been aiding in the Ukraine as those responsible for last February’s “fascist-led coup that installed an unelected, ultra-nationalist government in which Neo-Nazis from the Right Sector and the Svoboda party hold prominent positions.”

This is not a startling new approach by Obama whose administration has been responsible for the bombing of the Yemen, Pakistan, Iraq, Libya and Somalia. Kennedy, Kissinger, Nixon, Bush et al  were responsible for the suffering felt in Cuba, Nicaragua, Cambodia, Grenada and the list goes on. When we throw up our arms in horror at Moscow support for  pro-Russian separatists, let us be clear that their struggle  is a reaction to the manoeuvring  of America and its allies which initially heightened tension in the area  with the February coup.

I have little respect for Putin and the gangsters, with which he surrounds himself,  but let’s see some even-handedness in the reporting of events. Hundreds, many of them children,  have died in Gaza in the last few days as a result of Israeli terrorism. Its weapons, including nuclear capability, have been provided by the West. This could  end at a stroke, if the bumbling John Kerry was to call an end to all future supplies. The annexation of Crimea led to barely any loss of life and its population clearly wanted to be part of Russia. Putin, unlike Gorbachev and Yeltsin, has refused to play ball with further NATO expansion to the very borders of the State. For which, the White House has deemed that he is evil incarnate. The British and all those for whom American investment is manna, including Ireland, have obediently followed suit.

This is a propaganda war by the CIA.