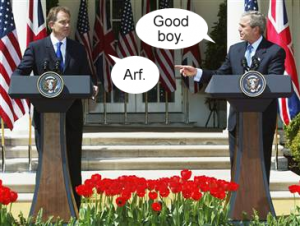 David Cameron has warned that the UK may be at risk from ‘radicalised’ jihadist Britons, currently operating in support of opposition forces in Iraq and Syria.   The numbers are small, three to five hundred at best, and he offered no proof to the Commons but  Cressida Dick, the Metropolitan Police’s assistant commissioner and head of specialist operations, warned that Britain could feel long-term consequences of the conflict.Tony Blair, that great tribune of peace, has defended the Western inspired overthrow of the democratically elected Muslim Brotherhood in Egypt because “ it was systematically taking over the traditions and institutions of the Country.” Is that not the role of Government?

Blair was at pains to point out that it was wrong to deduce that the current fighting in Iraq was related to the Allied invasion there by him and Bush. He is glaringly and singularly alone in that belief; throughout the rest of the World the ‘War on Terror’  is recognised as the biggest Foreign disaster since Suez. We are living with the consequences and the systemic, collateral damage throughout the Region.

The meaning of the word, radicalisation, has been corrupted by politicians to infer violent change to the  status quo. Violence may sometimes occur as a result of radical action to bring about change but not always. In recent history, radical action has been absolutely essential  where people have been disenfranchised, disengaged and disempowered.

I belong to a generation of ‘radicalised’ Derry people. We grew up in the fifties and sixties, recognising the inequity around us and the iniquity of the Northern Ireland Government which systematically discriminated against a substantial minority of its citizens with the support of  Westminster, the paymaster. We demanded the right to walk the streets of our own City, to a fair electoral system, equality in housing allocations and fair employment. Change came dropping slow and grudgingly until even more   radicalised groups turned to the gun. What radicalised them? British procrastination in the face of Unionist intransigence and violent suppression of peaceful protest but, undoubtedly,  the single most cathartic event was Bloody Sunday when  State forces turned their guns  on  its citizens.

Events in Northern Ireland are mirrored internationally, when powerful, imperialist forces brutally suppress national aspiration. The Palestinian suicide bomber is a product of  Israel, with US support,  flouting  International  Law with impunity  and the denial of justice to the people of Gaza who have seen their children murdered and the guilty walk free. In Pakistan alone, the CIA controlled Drone Program has killed at least two thousand civilians , including  three hundred children. Has one quisling,  British politician, Tory, Labour or Liberal made a single criticism of Obama’s deadly strike force?  That’s why young Muslims  become radicalized; they understandably see the ‘War on Terror’  as an attack on their Islamic Faith.

Radicalisation is fuelled by the desire for fundamental change in order to correct perceived wrongs. It has happened throughout the World – in former colonies, in racist South Africa where, as recently as the 80s, Margaret Thatcher was condemning Mandela as a terrorist, in Ireland for most of the last two centuries, in Vietnam and South East Asia. Ghandi, Malcolm X and Martin Luther King had all undergone radicalisation in the course of their lifetimes.

Radical thinking is the precursor to self determination and the restoration of dignity. Sinn Fein in Ireland, where it was at times proscribed both North and South, has shown that it can also save lives.