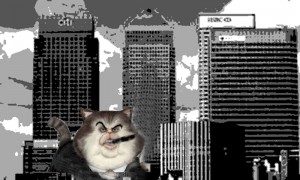 BBC News today has been headlining the case of a Welsh man who pretended to be in a coma while he was in receipt of disability benefit. However, he was filmed on CCTV pushing a shopping trolley unaided . Nobody condones this behaviour but I suspect that this will be used as an extreme example of widespread benefit fraud, a view that is not supported by official figures which clearly show that the sums arising from misuse are miniscule and that the vast majority of claimants are transparently honest in their dealings with the DWP.

Edinburgh, home city of disgraced RBS banker, Fred Goodwin, is festooned with adverts asking people to report benefit cheats. I have not to date seen any on taxation fraud but there are many big names that come to mind. Let’s start with the fat cats in  retail, banking, telecommunications, IT………

For nearly twenty years, I was headteacher of two  separate schools   in Clackmannanshire. In one of those establishments, there was a very high level of deprivation across the local community. Many   received ‘free’ school meals. I never regarded it as my responsibility to police the system and, like others, I would have liked to see meals as an inclusive offer for all pupils. One Monday, a mother who had four sons at school, called to tell me that the children would no longer be getting ‘free dinners’ as her husband, a former miner, had found a job, labouring on the Dunblane bypass. She was asserting her dignity and confirming the indomitable  honesty of working people on benefits. The ultimate change in family circumstances probably  was   to reduce an already meagre budget. Had she put the welfare of her children first,  as I felt,  then she would have remained silent and, in my view, would have been morally justified in so doing.

Hullabaloo about benefit fraud is a pernicious part of  vile Government propaganda  that fraud is ripping the welfare budget to shreds. That’s a monstrous fabrication. The gross national amount of benefit fraud is very small at around £16m for 2013 according to DWP figures – that’s about one   third of 1% of the total budget.

The amount of tax lost through tax non-payment and avoidance, according to HMRC official figures for 2011-2012 was £35bn. However,  PCS, the trade union which represents HMRC staff, says that the true figure is nearer £120bn. This is money that is being stolen from the Exchequer by corporate big business and the wealthiest people in the land. Many of these will have figured at some point on the Honours’ charade. Government and the right wing media do not heap opprobrium on these cheats who steal from the public purse on an industrial scale.

The fact that families on benefit find themselves in dire straits  has nothing to do with fraud but rather the precipitate  decrease in the level of assistance which has accelerated under Iain Duncan Smith’s management of the welfare budget. In the 1970’s,  benefit represented 60% of the median wage; in 2014, it is 30%.

This government and its allies in the media have set about deconstructing the Welfare State and a key strategy is to exaggerate out of all proportion the amount of benefit fraud.

I couldn’t imagine that sensitive and dignified Tullibody mother claiming her TV licence on benefit, if she was earning a salary of over £100 000 . The Deputy Prime Minister does.

We know who the real scroungers are.