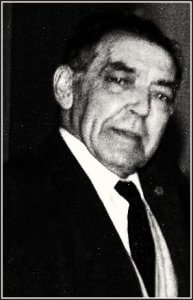 Tomorrow is International Credit Union Day when millions of credit union members in over 100 countries around the World will celebrate the financial liberty and access to services that the most powerful self-help movement on the Planet has given them. The enormous growth of the movement in Scotland can be traced back to the persistence and vision of a painter-decorator in the newly built Drumchapel housing scheme.

Bert Mullen understood the challenges for families in moving to a new house. Escape from overcrowded, slum tenements was welcome, although something intangible had been lost in the process –  that sense of community which  had been the gel, holding people together in some of the worst slums in Europe. Bert Mullen recognised that the planners had provided four walls and a wee garden for folk but there was a distinct absence of social amenities such as libraries, a pub and even a dependable bus service. Mullen realised  that the social fabric of society had been torn apart; he may not have articulated it in those terms but through his daily work , he saw the struggle to exist for these working class families in a new and demanding environment. The loan shark was a social evil and the pawn shop was all too frequently a social necessity.

Bert Mullen learned through reports in Irish newspapers  of the credit union movement and the impact it had made on families and communities there. He realised that it could work in Scotland and, in particular, for the Drumchapel community where he and his young family now lived  . With evangelical zeal, he researched what he could through books and the papers. Journeys were made  to the Dublin headquarters of the Irish movement ,  where his dedication was appreciated and , under the guise of international development, field officers , employed by them , paid occasional visits to Glasgow to provide skills and training. In February 1970, Bert Mullen established Scotland’s first credit union. Initially known as Western Credit Union, it later changed to Drumchapel Credit Union. This great pioneer, with the help of his friends , the Mc Sevenys and others such as Bill Murphy,   established a facility , providing access to affordable, reliable and self-sustaining services that would change the lives for the better of  hundreds of thousands of Scots across the country. Government data for 2015 shows  that there are now 97 credit unions in Scotland with combined assets of £580million and savings of £506 million , held by 334 000 members. Those, by any measure, are very significant figures in the modern history of this country.

What appealed particularly to Bert and his friends, was that this was a member-owned, capital structure where the surplus would be controlled and managed   democratically by the entire membership. In simple terms,  there would be no fat cat,  individual, multi-share holders , creaming off profits. At a time when the banks are making no returns to savers, credit unions have continued to pay dividends to their members.

Bert Mullen’s initiative, inspiration and vision have made a sizeable impact on the economy of Scotland; for many families, individuals and communities they have provided the route to a better way of life; it has shown the importance of small savings and the potential for co-operative democracy and member ownership; it operates in a framework which is non-racial and non-sectarian; it addresses the holistic needs of members; it has restored dignity , self -belief and  hope. By any yardstick, these are very considerable achievements. Is it not time then that Glasgow Council and the Scottish Government recognised in some form the enormous achievements of  Bert Mullen?

Tomorrow would be a very appropriate occasion.