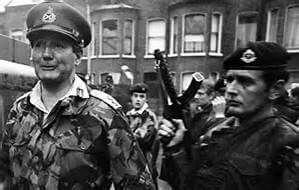 I have just watched ‘Sports Personality of the Year’ and, understandably in media  tradition, time was given in the final minutes to those sporting people who had  died in the last year.  Today’s papers have coverage of the death of Lord Janner who had been accused of sexual assault on young people but had been deemed unfit to stand trial on the grounds of serious, ill health. His accusers will never see justice.

Last month, general Sir Robert Ford died at the ripe old age of 91. He is of historic significance   because he was the British Commander of Land Forces in Northern Ireland in 1972 when the Bloody Sunday Massacre  took place in Derry.  Evidence to the Saville Inquiry on those events included a confidential memo ,sent by Ford to his boss, Lieutenant-General Sir Harry Tuzo which read,

‘We may have to shoot selected ringleaders amongst  the Derry young hooligans after clear warnings  have been issued’.

He further suggested that normal army ammunition might be too powerful for an urban situation and suggested the substitution of .22 bullets for engaging with the ring leaders; he envisaged the weapons being used to incapacitate and cause fewer casualties. The decision to employ  1st Para in Derry, against the advice of other military colleagues, was Ford’s . It is inconceivable to me that   Downing St and the highest echelons of the MOD would not have been aware of that and given  full support.

Ford was criticised in the Saville Report for his use of military, and especially  the Paras , to police  a civilian demonstration. However, in mind-boggling semantics, Saville concluded in his report that the General could not have foreseen that the soldiers would fire unjustifiably.  The Inquiry took 12  years to complete. In the  final period, speculation was widespread as to the cause of the delay. It is clear, as is probably the case with the Chilcott Report, that finding a form of words to exculpate those whom the    evidence had already damned, was the stumbling  block.

It would have been much more difficult for Cameron to stand in the Commons and declare Bloody Sunday,  ‘unjustified and  unjustifiable’ ,  if Saville had followed the  evidence and indicted the supreme command at the MOD and the Government of the day.

May the year’s dead rest in peace.