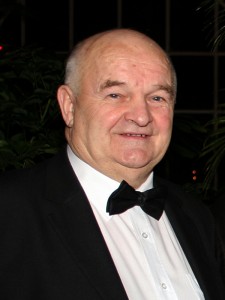 I first met John   in 1972 in Bert Mullen’s Drumchapel home where I was sharing my experience as a director of Derry Credit Union during the sixties. He was one of a group of enthusiastic credit union pioneers, led by Bert, Bill Murphy and the McSeveneys. I was living in Edinburgh at the time and used to go through at weekends to conduct workshops on management and operational issues. Bert founded Scotland’s first credit union in Drumchapel in 1971.

Liz and I went to teach in Zambia  and I lost touch with Bert, John and the Group.  In the mid-eighties, as a headteacher in Tullibody, I was asked to write a piece on self confidence and learning for a newsletter being published by a multi-agency regeneration group, including Central Region. In the text of the article, I mentioned credit union as a proven vehicle for enhancing individual and community self-esteem. Unknown to me, John had given up the Glasgow taxi-business and was now working as a credit union development officer in Stirling and soon after the publication was released, his radiant smile and 100 decibel tie illuminated my school office.  I didn’t have the time then to play a very active role in credit union but we were in regular contact. John was in utopia, being paid to assist communities and he tackled the work with total enthusiasm.  I doubt, if there ever was a more committed and dedicated local authority officer.   He frequently called on me to address groups across Scotland on the ideals of credit union and how it had the power to change lives.

In 1993, he asked me to give the Keynote Speech at the launch of the Scottish League of Credit Unions.

“Give them plenty of the philosophy – we are a movement of people not money!”  All of us who knew and admired John Kerr recognise that as a true indicator of his character. The pool of poverty which he experienced in Glasgow was the spring which shaped the momentum of his life activity and  what a force that was. Inertia was anathema to John.   That first meeting in Cranhill was an extraordinary occasion and not just for the bowls of soup. Here was a group of people, committed to the service of others, gathered together to launch an umbrella organisation which recognised the unique identity and character of  the Scottish people as a nation.

Occasionally he could be brutally honest; his antennae quickly detected those with a dysmorphic sense of their own importance.  John and I were invited by Chancellor Brown to attend a conference in Murrayfield which was addressed by Bill McDonough, CEO of the Federal Reserve Bank of New York. His theme was John’s raison d’être,  ‘Connecting Finance with Communities’ . McDonough  made the point forcibly that sending self-appointed experts from outside of the community to identify problems and develop solutions doesn’t work. Among those present was Fred Goodwin of  RBS who had previously been appointed Convener of a Credit Union Task Force by Gordon Brown – a task force which was singularly unrepresentative of the Scottish movement. John and Fred had disagreed forcefully at an earlier meeting. There was a mingling over coffee after the Murrayfield  meeting and Fred came across to talk to John who greeted him with;

“You’ll know all about these self-appointed experts, Fred”.    Goodwin just laughed but those around us took the point, although some of the professional sycophants were discomfited at the overt nature of John’s exchange.

He also valued people and went out of his way to commend commitment and contribution.  One of my first tasks when I joined the League, was to write a critique of ABCUL’s proposals for a Central Service’s Organisation. When he read my response, John said,

“You have slain the CSO monster – the pen is mightier than the sword!”  I was to learn later that on reading the League response that a bank executive, who was to underwrite the project, pulled the plug.

John Kerr’s life was the physical manifestation of the principles of the Credit Union Movement;

We remember   a leader of incomparable stature whose innate decency, vision and transparent integrity touched the lives of each and every one of us. He would want us to continue his work   with the same drive and energy that characterised his life.