Rhiannon Giddens has a message for us all 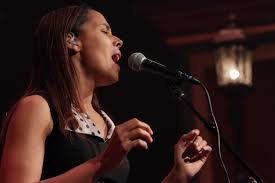 In ‘At the Purchaser’s Option’ , the superb  Rhiannon Giddens in her bravura performance at the Queen’s Hall, Edinburgh , on Sunday, reminded us that the buyer had the choice whether to buy or refuse their new slaves’ babies.  That number was inspired by an 18th century slave advertisement.  Giddens told us that as  a parent she could empathise with the feelings and plight of a  mother of a child , born into slavery. It’s a theme that is reprised throughout  her latest album, ‘Freedom Highway’  that she showcased  to a packed audience.  But this  was more than your usual merchandising exercise and included a high octane peurt-a-beul that received an enthusiastic  standing ovation. Giddens’ wondrous dynamic range was well supported by her band of musical polymaths who showed their mastery of base, fiddle, piano, mandolin, guitar, percussion and a maestro performance on bones by Hubby Jenkins. ‘We Could Fly’ ,  a sinuous, potently  African anthem,  narrates that the enslaved in death return to their homelands. Possessed of an ornate soprano voice, the barefoot Giddens was in perpetual motion throughout   and her energy was well complemented by  fellow musicians onstage. Towards the end of the evening, Dirk Powell , accoustic guitar and producer of  her recent record, introduced onstage a young accordionist, Neil Sutcliffe from Stirling. If the youngster was over-awed in this exotic company, it was never apparent.

In the Trump era, it was a  considerable  pleasure to be reminded of  the splendid,  rich tapestry of African- American tradition and its place in the grotesquery of American history. An early number was ‘Birmingham Sunday’ , which dates from the early days of the Civil Rights Movement but served as a reminder that black oppression continues and that ‘Black Lives Matter’ is a vital and essential campaign.  As  parts of Europe embrace extremism and the British working class are deluded into support for the far right of the Tory Party, this intelligent woman’s soaring music had an immediacy and a universal message.

What we protested against 50 years ago, requires our energy and commitment every bit  as much today.