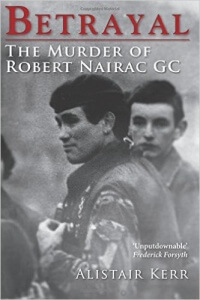 Robert Nairac is the subject of a new book, pejoratively titled ‘Betrayal, The Murder of Robert Nairac‘.   The author is Alistair Kerr, a Scot and former Foreign Office diplomat; an African history graduate, he worked mainly in North Africa.  He places the blame for Nairac’s capture and subsequent disappearance on an officer in the SAS, Colonel  Clive Fairweather,  who was in command of operations when the incident occurred on 15 May, 1977.  Fairweather was slow to react, the book claims, because of the colonel’s serious alcohol problems.

That may be so but Nairac was a flambuoyant and reckless British spy who frequented pubs and other places where  republican activists were known to meet . His military colleagues disapproved strongly of his approach and behaviour;  In his article, ‘Shadow Man’, Eamonn O’Neill quotes a former high-ranking military source as saying,   “It’s simple –  Nairac didn’t just stick his head into the lion’s mouth – that wouldn’t have been enough for him. Instead, he had to go and stick it right up the lion’s arse.”

Nairac studied  medieval and military history at Oxford, where he showed the first signs of standing out from the crowd. He kept a trained hawk in his bedroom and wore a Grenadier Guard’s uniform during exams . After graduating , Nairac attended the Sandhurst military academy, and while most soldiers tried to avoid the Six Counties, Nairac volunteered to serve there.

Fairweather  was a member of the King’s Own  Scottish Borderers and was second-in-command at the siege of the SAS when it invaded the Iranian Embassy in 1980. After military service, he went on    to become Her Majesty’s Inspector for Prisons in Scotland from 1994 to 2002, winning a reputation for fighting for prison reform, for better conditions, better treatment for women prisoners, and not least for alternatives to prison, especially for young offenders – including the Airborne Initiative, providing alternatives to prison for offenders from 16-25. He was deeply hurt when the programme closed in 2004 largely due to lack of funding from the devolved Scottish government.

Nairac, the maverick, untrusted by his fellow officers, was awarded the George Cross posthumously; an event that was simply part of  a wider,  British propaganda exercise to treat this story as the callous murder of a peace loving soldier,  doing his duty and trying to prevent the Irish from murdering  each other. The citation did not mention anything of the murky dealings of Robert Nairac which have been documented by respected print and television journalists; the Yorkshire TV programme, ‘Hidden Hand ‘, broadcast in 1993, raised unanswered questions about Nairac’s links to Portadown  Loyalist paramilitaries and their involvement with the Dublin and Monaghan bombings;   Ken Livingstone alleged in the Commons  that Nairac was quite likely to have been involved in the organisation of the brutal murder of the three Miami Show band members; collusion was implicit in the work of the security forces.

Nairac was a product of Ampleforth College, the Catholic public school and was related to members of the Anglo-Irish  upper classes. The Irish media were active participants in the propaganda campaign against Republicans and spiked all stories that touched on Nairac’s undercover activities. The author of this book is perpetuating the myth of murdered hero and is very clearly a revisionist, establishment kite flyer. The reviews on an online book supplier site have obviously  been manufactured from a template – ‘at last , the truth about this courageous victim of the Troubles.’

The puppet-master was a casualty of war.