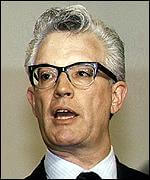 In recent times, the passing of some celebrity leads to expressions of barely controlled  grief by admirers. Arguably , the work of trade unionist  Rodney Bickerstaffe, who died this week, impacted on the lives of the vast majority of working people. The achievement of the Living Wage is almost entirely due to his relentless campaigning and ensuring that the Blair Government delivered on its promises. He took early retirement from Unison, at the peak of his powers to the amazement of many in the trade union movement. However, he did not stop working and determined that he would achieve for pensioners the dignity and justice that he had strove for workers  in his union days.

The darling of the TUC for his passion, eloquence and commitment to the cause, I was deeply honoured when he asked if I would second his farewell speech at the 2000 TUC, a motion urging the Labour Government to invest in  public services, a recurring  Bickerstaffe cri  de Coeur.  Glancing at me before ascending to the rostrum, he muttered, ‘just a rant John’. It was vintage Rodney and the audience was on its feet for a prolonged ovation. It carried into my contribution and I began by acknowledging it as a rare occasion for me  to get an ovation before I had said anything.

The last time I met Rodney,  he was  guest speaker  at a Macmillan dinner in Motherwell in honour of the late Jimmy Knapp of the RTM where . He spoke movingly of Jimmy’s  humanity and record of service  on behalf of rail workers and their families. He received polite applause from a middle class crowd who were more concerned with appearing in a Herald picture than any appreciation of fine oratory.. He was followed by two ‘professional’ after dinner speakers  whom I found quite frankly appalling; both were retired, senior, police officers who  strung together some crude double entendre and   enjoyed demeaning some working class characters in the areas where they had served. That fairly moronic crowd adored them.

It is rare that trade union leaders are loved by their members but Rodney attracted universal affection across the movement; he was a genuinely lovely person. His wife, Pat, a constant companion and his family will receive every sympathy from workers at their sad loss.